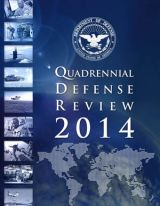 With the recent release of the 2014 Quadrennial Defense Review (QDR) from the US Department of Defense there is a need to analyze and create a strategy to deal with the world ahead. On April 16, 2014, a panel of experts on the defense budget and international security discussed the strategy and means by which the United States and its European allies could coordinate in the future to face the array of threats that lie ahead.

Speakers first set the scene by laying out four key trends that defense planners must be mindful of: individual empowerment, new peer competitors, challenging regional agendas, and resource scarcity. Individual empowerment has provided a structural change from the Cold War with a rising middle class, and has resulted in a shrinking gender gap in health and education. New peer competitors, such as a more assertive China, hinder US ability to operate with the same power it had in the past few decades. Challenging regional agendas could cause conflict spillover and disrupt global security; specifically, rising nonstate actors in South Asia and the Middle East. Resource scarcity also poses significant problems as it could lead to lengthy, intractable conflict and severely damage the environment.

The recent crisis in Crimea also weighs on Europe and the transatlantic partnership. This QDR significantly downplays Europe and, since it was released before the conflict in Ukraine escalated, it doesn’t fully take into account the potential consequences of a strong, stubborn Russia for the United States. Nor does the document outline how the United States will build up newer allies. In light of the crisis and the debate over how the United States should act, the decreasing US defense budget and current force numbers took center-stage during the discussion. Though the budget is lower than in previous years, discussants remarked that it only challenges the current defense architecture and indicates the need for a reworking of US defense capabilities with close attention to disruptive technologies.

Considering the growing array of security challenges, the transatlantic partnership is crucial to US security in the future but significant hurdles must be overcome with strict attention to budgets and force structure.