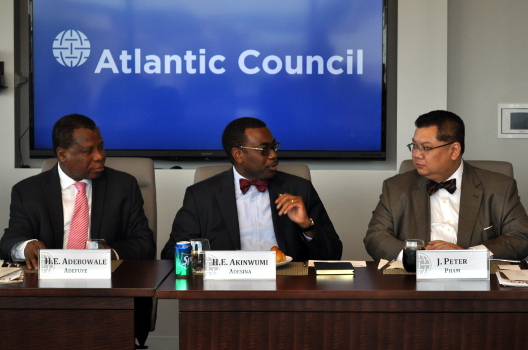 Later this month, the African Development Bank (AfDB), the regional multilateral bank for Africa, will hold elections for a new president to succeed incumbent Donald Kaberuka.

On Monday, May 11, the Africa Center was pleased to welcome a leading candidate for the position, Nigerian Minister of Agriculture and Rural Development H.E. Akinwumi Adesina.

Adesina shared his vision for the AfDB, laying out his five priorities: strategic investment in infrastructure; increased involvement of the private sector; job growth, particularly for youth and women; reviving rural economies for inclusive growth; and increased regional integration for shared prosperity.

In his opening remarks, Adesina reiterated the importance of expansive, but inclusive, economic growth and development—a goal that he noted directly impacts peace and stability across the continent. He remarked that Africa is not a poor continent, and must better leverage its resources, including, but not limited to, international aid, to promote sustainable development.

Adesina has extensive professional experience throughout Africa, including four years as Nigeria’s Agriculture and Rural Development Minister, during which time he launched an innovative and effective electronic wallet system for Nigeria’s farmers, designed to increase access to and affordability of agricultural inputs. In 2010, he was appointed by United Nations Secretary-General Ban Ki-moon as one of seventeen world leaders to galvanize support for the UN Millennium Development Goals. In 2013, Adesina was selected as Forbes Africa Person of the Year for his bold reforms in Nigeria’s agriculture sector.

Adesina holds a master’s degree and doctorate in agricultural economics from Purdue University. Prior to studying in the United States, Adesina earned a bachelor’s degree from the University of Ife in Nigeria. After his studies, he worked as Associate Director for the Rockefeller Foundation for ten years, including serving as the Regional Office Director for the Southern Africa Office in Zimbabwe. He subsequently served as Vice President of the Alliance for a Green Revolution in Africa, where he led several bold policy and innovative finance initiatives that leveraged over $4 billion in bank finance commitments towards Africa’s agriculture sector.

Later this week, he receives an honorary doctorate in agriculture from Purdue University in recognition of his development work in Africa.

Also in attendance and participating in the discussion was H.E. Adebowale Ibidapo Adefuye, Ambassador to the United States of the Federal Republic of Nigeria.