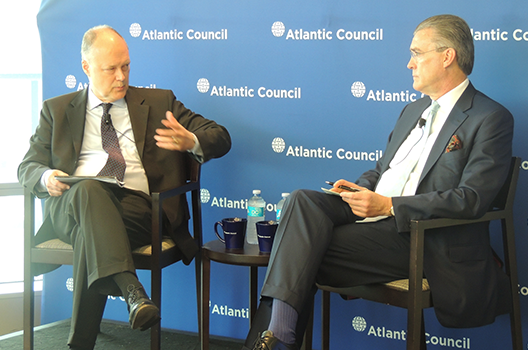 On June 21st, the South Asia Center hosted a discussion with Special Representative for Afghanistan and Pakistan, Ambassador Richard Olson, to discuss the current state of affairs in the region. Moderated by Ambassador James B. Cunningham, Senior Fellow in the South Asia Center, this discussion comes at a time when Afghanistan faces mounting challenges. The peace negotiations with the Taliban remain stalled and the implications of the drone strike that killed Mullah Akhtar Mohammad Mansour are unclear. Ambassador Richard Olson spoke about efforts to negotiate with the Taliban, continued defense support to Afghanistan and maintaining peace in the region by improving cooperation between Pakistan and Afghanistan.

This conversation served as a prelude to the upcoming NATO Summit in Warsaw and European Union Conference in Brussels where the United States and its European allies will address the issue of ongoing insurgency in Afghanistan. The panelists discussed and debated what role the international community should and could play in Afghanistan to facilitate its long-term peace and stability.