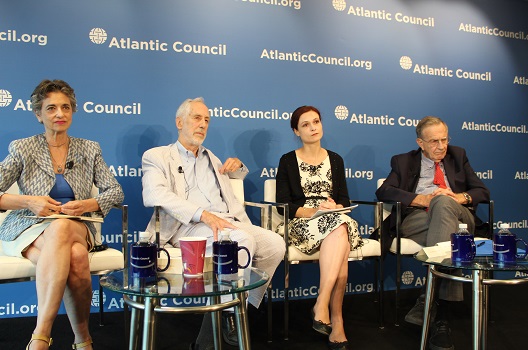 Iran’s environmental challenges are reaching a crisis point. Severe water and air pollution, deforestation, land degradation, desertification, climate change, and biodiversity loss are only a few of the increasing number of major environmental issues faced by Iran. These calamities have become a source of social and economic hardship, a threat to public health and a factor in mounting political protests.

On June 26, the Atlantic Council’s Future of Iran Initiative launched a new issue brief, Environmental and Wildlife Degradation in Iran, by ecologist David Laylin. The report details the breadth of these challenges and outlines steps the Islamic Republic and international partners might take to begin to remedy them.

During the discussion, Laylin noted while many of the challenges had their roots in practices, such as excessive dam building, that began under the Shah, the crisis has worsened considerably since the 1979 Islamic Revolution because of poor and sometimes corrupt management. Laylin cited inefficient water use, a lack of funding for the Department of the Environment and insufficient coordination between the government, academia and some 850 non-governmental organizations that focus on the environment. Laylin stressed the need for education and for the Iranian public, especially young people and women, to become more involved in environmental protection. He also praised United Nations programs on the environment and past US-Iran scientific exchanges, noting that both countries have had problems with excessive dam building and saline lakes.

Susanne Schmeier, a senior lecturer at IHE Delft who joined the panel discussion, warned that the negative environmental effects go beyond Iran’s borders. “European countries are perceiving the environmental crisis in Iran as something that is threatening not only stability within Iran, but also regional and global stability,” she said. Schmeier highlighted the unsustainable and inefficient use of water resources throughout Iran, a contributing factor in ever-increasing migration “especially if you link it with the refugee crisis experienced by European countries in recent years.”

Schmeier also outlined European efforts to work with Iran on water issues since the conclusion of the 2015 Iran nuclear deal but acknowledged that this cooperation could be jeopardized by the US decision to leave the deal and re-impose secondary sanctions on European companies that do business in Iran.

Working for an institution that advises the US government, Schweitzer said the US has significant reasons to work with Iran in the environmental sphere including concern for the welfare of Iran’s neighbors and the benefits US scientists gain from working with extremely well qualified counterparts in Iran. He noted that the US is also a member of “international [environmental] agreements, about half a dozen, which the Iranians are also party to… These agreements are only as useful as its members make them to be.”

Laylin, asked about Iran’s jailing of members of a prominent environmental NGO, said “there are elements in Iran who really want cooperation. There are other people who don’t want foreigners” meddling in Iran.

Schweitzer said he hoped to continue scientific engagement with Iran, despite the obstacles posed by both the US and Iranian governments and the increased difficulty of obtaining US visas for Iranians after a June 26 Supreme Court decision upholding the Trump administration’s travel ban on mostly Muslim nations. The National Academies held its last workshop with Iranians on environmental issues in December 2017, in Italy.