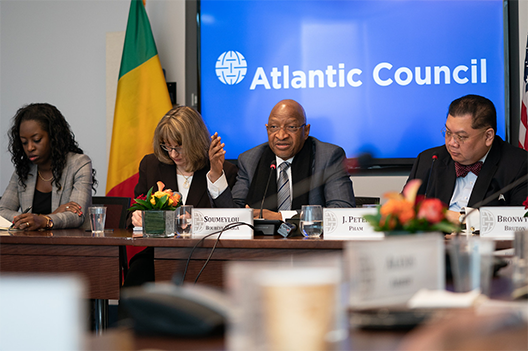 On Wednesday, March 27, the Atlantic Council’s Africa Center hosted H.E. Soumeylou Boubèye Maïga, prime minister, and H.E. Kamissa Camara, minister of foreign affairs and international cooperation, of the Republic of Mali, for a discussion on the security situation in Mali and the Sahel region.

Maïga presented his country’s efforts to improve security at both the national and regional levels. He praised the ongoing presence of the United Nations Multidimensional Integrated Stabilization Mission in Mali (MINUSMA), and advocated for its renewal by the UN Security Council. However, he warned that armed groups do not respect borders and operate in a pan-Sahelian theater. To properly respond to these threats, he asserted that MINUSMA’s mandate should be expanded to provide a regional security architecture.

The prime minister also addressed the state of the Group of Five for the Sahel (G5 Sahel) Joint Force, arguing that the organization should expand to include more partners from West Africa in order to fill structural gaps as well as to give countries whose own security is also impacted by jihadist and other terrorist groups operating in the Sahel region a role in confronting the challenge. Without the inclusion of countries such as Côte d’Ivoire, Senegal, and Togo, Maïga warned that threats successfully countered by the G5 Sahel Joint Force would regroup and find refuge at the borders with non-member states. In addition, he called for the standardization of training and equipment among G5 member states’ militaries to improve interoperability and ensure similar capabilities among the Joint Force’s units.

Maïga hailed the solid cooperation between the United States and Mali in military and security matters and expressed the hope that, in time, it would expand to include partnerships in economic and other sectors.

Within Mali, Maïga outlined his government’s efforts to implement security sector reform. He noted that the Malian government had initiated an inclusive process that has engaged both local and international experts, as well as a cross section of Malian civil society, religious organizations, and opposition parties. While the security situation has improved in Mali’s northern region, Maïga acknowledged that the implementation of the 2015 Algiers Accords has been complicated by the migration of jihadist groups and criminal networks to the central Mopti region.

Despite these challenges, Camara outlined the progress that Mali has made in addressing security threats since a military coup in 2012. Citing Mali’s longstanding partnership with the United States, Camara reiterated how critical continued US engagement through initiatives such as the Trans-Sahel Counterterrorism Partnership is to the success of Mali’s fight against armed jihadist groups.

A discussion, moderated by Dr. J. Peter Pham, vice president for research and regional initiatives and director of the Africa Center at the Atlantic Council, followed the delegation’s remarks. Participants focused on mitigating abuses by Malian security forces, the application of justice in cases of abuse, and ways to improve interoperability between MINUSMA and the G5 Sahel Joint Force.

The prime minister and foreign minister were accompanied by a delegation that included H.E. Mahamadou Nimaga, ambassador to the United States; and The Hon. Karim Keïta, chairman of the National Commission of Defense, Security, and Civil Protection of the National Assembly; of the Republic of Mali.

A reception for the visiting delegation and other participants followed the roundtable, during which Prime Minister Maïga, acting on behalf of H.E. Ibrahim Boubacar Keïta, president of the Republic of Mali, presented Dr. Pham with the insignia of Commander of the National Order of Mali, the highest of the country’s honorific orders, for his commitment to Mali over the years, especially during the arduous process of restoring and strengthening constitutional government. The award was approved by President Keïta last year, but, due to the scheduling demands of his US government service, Dr. Pham had not been able to travel to the West African country for his investiture.