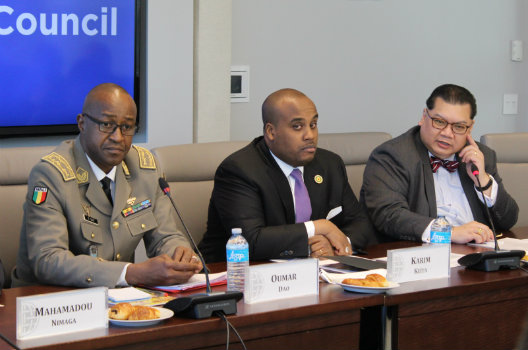 In their remarks, General Dao and Mr. Keïta discussed the worsening security situation in the Sahel region, noting that since 2018 began, sixteen terrorist incidents have cost over thirty civilian lives. Among other challenges, General Dao stressed that the Malian defense forces lack the necessary resources to improve the country’s defense and security apparatus, implement much needed reforms, and bring sustainable peace to Mali and the broader Sahel region. To combat this problem, General Dao called for greater engagement and support from the UN mission in Mali (MINUSMA) and other international forces operating in the region.

A discussion followed General Dao and Mr. Keïta’s remarks, focusing on the role of the G5 Sahel in counterterrorism operations across the region and the upcoming local, regional, and presidential elections that are scheduled to take place in Mali between April and July of this year.

General Dao and Mr. Keïta were accompanied by a delegation that included Amb. Mahamadou Nimaga, diplomatic advisor to the president and Mr. Ibrahim Biridogo, chargé d’affaires at the Embassy of Mali to the US. Also in attendance and participating in the roundtable were General William E. Ward, Former Commander, US Africa Command; Amb. David Shinn, former US Ambassador to Ethiopia and Burkina Faso; Amb. Phillip Carter III, former US Ambassador to Côte d’Ivoire and Guinea and the former Deputy to the Commander of the US Africa Command (AFRICOM); Amb. Bisa Williams, former US Ambassador to the Republic of Niger; and several other US government officials, congressional staffers, business leaders, and representatives of advocacy organizations.