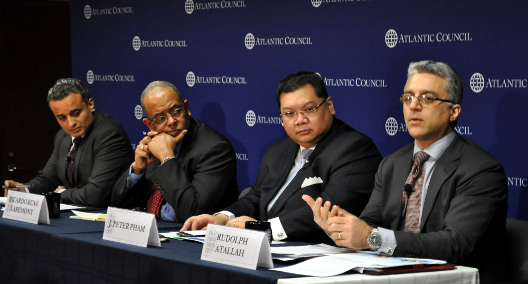 The Atlantic Council’s Michael S. Ansari Africa Center hosted a discussion on the escalating crisis in Mali and the threat it poses to the neighboring countries of Sahel.

Moderated by J. Peter Pham, director of the Ansari Center, the panel featured Rudolph Atallah, senior fellow of the Ansari Center; Anouar Boukhars, nonresident senior fellow of the Middle East Program at the Carnegie Endowment for International Peace, and assistant professor of international relations at McDaniel College; and Ricardo René Larémont, professor of political science and sociology, and Binghamton University and Carnegie Corporation scholar on Islam. The panelists highlighted the rising danger to US interests in the Sahel, but also its risk of being drawn into a new conflict, both of which underscore the need for a carefully calibrated response from the Obama administration to promote security and stability in the region.

The crisis unfolding in Mali and its spillover into the Sahel region has reached global proportions with the addition of European forces to the region. British Prime Minister David Cameron has called the seizure of northern Mali by Islamic extremists an “existential threat” to British and European interests, and France’s intervention in the West African country has led to the US Air Force initiating flights to ferry French troops and supplies there as well as pressure for the United States to “do more.” The attack on the In Amenas gas plant in Algeria by a militant group linked to Al-Qaeda in the Islamic Maghreb (AQIM)—allegedly in retaliation for French airstrikes on Islamist positions in Mali and, according to Secretary of State Hillary Rodham Clinton, using weapons from Libya—resulted in the deaths of dozens of foreigners, including a number of Americans and Europeans, and is a sobering reminder of the dangers the widening Malian conflict poses to the entire region in general and to Algeria in particular.