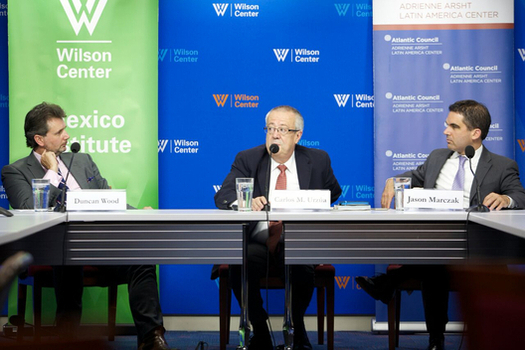 Urzúa discussed the candidate’s fiscal and economic proposals and opened the conversation discussing the candidate’s top three priorities: upholding the rule of law, safeguarding the structure and values of a democratic republic, and fighting corruption. He explained that as far as his economic policies AMLO is concerned about Mexico’s gross domestic product (GDP). It has grown at about 2 percent for the past decade, more than Brazil, but not fast enough to keep pace with the country’s growing population. He highlighted that if AMLO wins the presidency he would preserve the independence of the Central Bank, keep the current corporate and value-added tax rates, support a renegotiated North America Free Trade Agreement (NAFTA), and ensure a responsible fiscal budget. Urzúa explained that Mexico’s primary deficits increased from 37 percent of GDP in 2013 to 50 percent in 2016, without real knowledge of the money’s destination. And while he expressed support for the Mexico’s Comprehensive and Progressive Agreement for Trans-Pacific Partnership (CPTPP) membership and the benefits of five new free trade agreements, he also worried about trade incompatibility with partners like Vietnam, who currently imports and exports many goods that Mexico depends on. A revised NAFTA would be upheld in any of its outcomes, according to Urzúa, and AMLO will honor Mexico’s treaty with Canada under the Trans Pacific Partnerships (TPP), even if not included under a NAFTA 2.0.

Next, Urzúa moved to detailing legislation to centralize, modernize, or eliminate administrative policies that he believes have impeded progressive growth in Mexico and have permitted a culture of corruption for too long. He proposed centralizing key social programs and other social services at the federal level, claiming that the currently decentralized system disables federal offices from ensuring appropriate use of federal funding. Additionally, he mentioned the need for a transparent bidding process for public contracts through reducing bureaucracy and preferential treatment by government officials.

In public infrastructure projects, he discussed plans to build a highway that connects the northern and southern regions, incentivizing tourism and sparking the stagnant economy of southern states. Similarly, he envisioned a train that connects the Pacific and the Gulf of Mexico as a way to compete with the Panama Canal. Urzúa explained AMLO plans to cancel the contracts for the construction of a new international airport in the State of Mexico because he believes the contracts were awarded to companies with links to the government in an unfair bidding process. He also stated that the project is not financially feasible because closing the Benito Juárez International Airport would result in unsustainable losses for the Mexican Ministry of Transportation, which funds the new airport. Urzúa suggested building the new international airport on Santa Lucía by adding two runways to an existing military airport and keeping Benito Juárez as the national airport. He also proposed offering current contractors the opportunity to become investors in the project. By doing so, the State of Mexico would be relieved from solely taking the risks associated with the construction of the project.

Lastly, Urzúa highlighted broader public policies in AMLO’s platform in the areas of social welfare, infrastructure, and military. As of 2016, Mexico’s poverty rate was 7.6 percent – 9.4 million citizens out of 124 million can barely afford a “basket of basic necessities” he explained. In order to tackle this, AMLO plans to extend the federal food programs for the elderly as a way of empowering this group and help it transition out of the informal economy. Urzúa also discussed a similar project named Programa de Jóvenes Construyendo el Futuro, which aims at utilizing vocation schools to educate and train the two million unemployed and uneducated young adults often referred to as the “ninis”. He believes they can eventually contribute to the formal economy and enjoy its benefits.

In the last part of the event, Urzúa answered questions from the audience related to Mexico’s energy reforms, foreign direct investment, and subsidies to agriculture and gasoline. Urzúa said that AMLO will honor private contracts given under the 2013 energy reforms, with the condition that the contract was awarded through a fair and transparent process. He confirmed that AMLO will revise the bidding process for future contracts, specifically those handed for exploration of crude oil. Currently, only 200,000 of the 900,000 barrels consumed in Mexico are refined domestically, the rest are imported from the US. Thus, he explained that Mexico needs to add two oil refineries to the already existing ones in order to increase production and capacity in the long run – a proposal estimated to cost $6-8 billion.

Urzúa also confirmed AMLO’s support for both public and private investment. On one hand, federal funds will be directed at clean energy, infrastructure, technology, and transportation. On the other hand, foreign direct investment from multinational corporations such as Apple, Amazon, Microsoft and General Motors will help revitalize what he called the “real economy” of today. With respect to government subsidies, Urzúa said that small farmers need federal funding to subsist because they cannot compete with big agriculture businesses and massive US imports, especially corn imports. However, AMLO would only consider subsidizing gasoline producers if changes in price and inflation demand it.