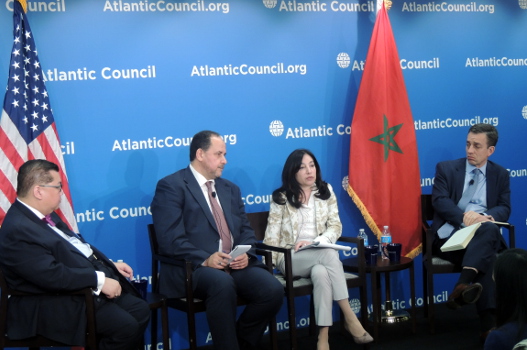 Unlike many of its neighbors, Morocco has experienced few terror attacks in recent years and remains a bastion of stability and prosperity in a turbulent region. In fact, Morocco’s programs to combat the root causes of terrorism are hailed as some of the most innovative and successful in the region.

On Wednesday, April 8, the Atlantic Council’s Africa Center and Rafik Hariri Center for the Middle East welcomed H.E. Mbarka Bouaida, Minister-Delegate for Foreign Affairs and Cooperation of the Kingdom of Morocco; Ahmed Abaddi, Secretary-General of the Rabita Muhammadia of ‘Ulamas (Muhammadan League of Scholars); Geneive Abdo, Middle East Program Fellow at the Stimson Center; and Stephen Grand, Executive Director of the Atlantic Council’s Middle East Strategy Task Force, for a discussion on Morocco’s contribution to the fight against violence extremism.

After an introduction by Africa Center Director J. Peter Pham, who noted the event was being held on the eve of the third US-Moroccan Strategic Dialogue, Bouaida spoke about Morocco’s experience with terrorism and its recent successes in combatting violence extremism. While the country has largely escaped the upheaval experienced in nearby Egypt, Libya, and Tunisia, Morocco is not immune to terrorism: in 2003 and 2007, the country suffered two bombings in Casablanca.

H.E. Mbarka Bouaida, Minister-Delegate for Foreign Affairs and Cooperation for the Kingdom of Morocco, speaks at the Atlantic Council on April 8.

Bouaida called on the international community to share responsibility for preventing terrorism, noting a set of initiatives that Morocco has recently undertaken to this end. Under the leadership of King Mohamed VI, the country has for years trained imams in moderate, tolerant Islam. Three years ago, Morocco extended this program to foreign imams—Mali, Gabon, Guinea, and other countries in the region have benefitted.

Bouaida emphasized the importance of including women and youth in counter-radicalization efforts, remarking that the “human dimension” must be at the center of all counter terrorism efforts. And these efforts appear to be paying off: over the past twelve years, Bouaida reported that Morocco has disrupted and dismantled more than 130 terror cells.

Following Bouaida’s remarks, Abaddi gave an overview of the history and evolution of modern-day Islamism, noting that extremist groups such as the so-called Islamic State in Iraq and Syria have “hijacked” Islam. To successfully combat such groups, passionate and learned advocates must counter the extremist narrative with principles of moderate Islam. To talk to extremist “tigers,” Abbadi said, “don’t send rabbits.” Rather, “tiger-trained” scholars are needed.

A panel discussion moderated by Pham followed. Abdo reiterated the value of training religious scholars in moderate Islam, Morocco’s success in reducing the number of foreign fighters traveling to Iraq and Syria, and her hope for a pan-Islamic “awakening.” She also noted the importance of pinpointing the efforts that have made Morocco successful in combatting extremism. Grand echoed Abdo, suggesting that lessons learned from Morocco’s experience should be exported and adapted to other countries facing similar challenges.

Abaddi and Abdo noted the pervasiveness of social media and its power to influence followers—particularly young people—toward or away from violent extremism. Abaddi suggested that governments should focus on empowering and building capacity among their citizens to provide a counter narrative to extremism, and noted that despite Morocco’s successes, the fight against extremism is not yet won.

Also in attendance at the discussion was H.E. Rachad Bouhlal, Ambassador of H.M. King of Morocco to the United States.