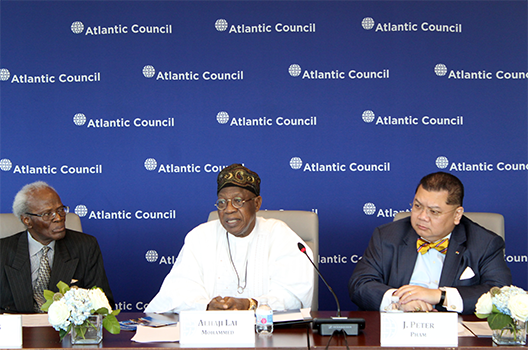 On Thursday, July 19, the Atlantic Council’s Africa Center hosted a roundtable discussion with the Minister of Information and Culture of the Federal Republic of Nigeria, H.E. Alhaji Lai Mohammed.

In his remarks, Lai Mohammed discussed Nigeria’s relationship with the United States and President Muhammadu Buhari’s recent visit to Washington – the first Sub-Saharan African leader to visit the White House during President Donald Trump’s administration. He explained that this meeting was a reflection of the “warm relations” between the two countries, highlighting ongoing efforts to advance the US-Nigeria relationship in areas of shared interest such as counterterrorism, trade, and economic growth and development.

Lai Mohammed concluded his remarks with a discussion on the present status of counter-insurgency operations against Boko Haram, as well as escalating clashes between farmers and herders in the Middle Belt. He indicated that security forces are making considerable progress against terror groups, with urban areas that were once the epicenter of Boko Haram’s insurgency now much safer. However, the speaker acknowledged that clashes between farmers and herders are on the rise, driven by factors such as climate change and overpopulation. He outlined the Nigerian Government’s attempts to improve the situation through various initiatives, including ranching and intercommunal dialogue, but admitted that such a complicated issue will take time to solve.

Among those in attendance and participating in the discussion were Ambassador of Nigeria to the United States H.E. Sylvanus Nsofor; former Ambassador of the United States to Nigeria Robin Sanders; and several current and former US government officials as well as business executives and representatives of human rights and other nongovernmental organizations.