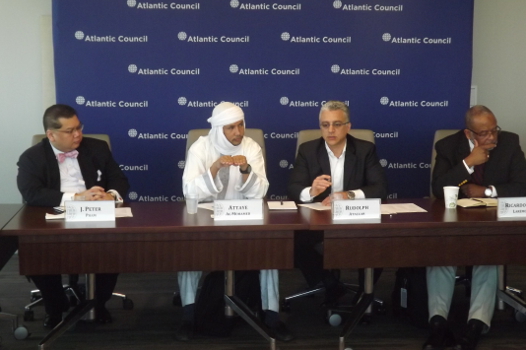 Mali has largely fallen from international headlines after a 2013 French military intervention drove back the constellation of terror groups occupying the northern part of the country, but the security situation has again deteriorated to the point it poses an urgent threat to the whole of the country as well as the region.

There are few people better positioned to speak about this critical moment in northern Mali than Attaye Ag Mohamed, Lead Human Rights Representative and Special Advisor to the Secretary General of the National Movement for the Liberation of Azawad (MNLA), one of the principal organizations representing the Tuareg and other northern groups. The Africa Center was pleased to welcome him to the Atlantic Council on Tuesday, May 5 for a briefing and roundtable discussion.

Terror groups operating with impunity in the country’s north are increasingly attacking United Nations (UN) and Western targets and staging attacks as far south as the capital Bamako. At the same time, the international community is racing to break the cycle of northern rebellions by convincing Tuareg separatist groups to sign a peace agreement with the Malian government by mid-May.

In his remarks, Attaye detailed the latest developments in the region, and noted that, following recent violations of the truce lines by government-aligned militia and the failure of UN peacekeepers to stop their advances, clashes in northern Mali between the government and separatist factions threaten the ongoing peace process. He also expressed concern over distrust between the Malian government and disparate rebel groups as an impediment to finalizing the peace process.