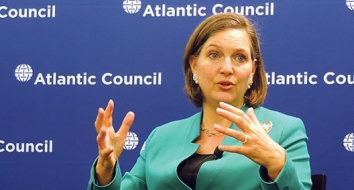 Assistant Secretary of State for European & Eurasian Affairs Victoria Nuland spoke to a packed house at the Atlantic Council Wednesday in her first public address in office, highlighting the importance of the transatlantic relationship and urging the United States and Europe to work towards a “transatlantic renaissance.”

“It is no accident that I wanted to give my first speech as assistant secretary of state for Europe and Eurasia at the Atlantic Council because today I want to talk about doubling down on the transatlantic relationship,” she said. “America needs a strong Europe, and Europe needs a strong America. The greater the transatlantic and global challenges, the more important it is that the United States and Europe address them together.”

Amb. Nuland’s address called for a “a new burst of energy, confidence, innovation, and generosity, rooted in our democratic values and ideals.” She emphasized the transatlantic community’s shared values, and called on both the United States and Europe to lead the charge for democracy around the world. “The world needs a community of free nations with the will and the means to take on the toughest challenges, and to work for peace, security, and freedom when they are threatened,” she said.

While US and EU negotiators work toward a comprehensive Transatlantic Trade and Investment Partnership (TTIP) in Brussels this week, Amb. Nuland highlighted the benefits of the proposed trade deal: “TTIP can be for our economic health what NATO has been to our shared security for sixty five years: a whole that is greater than the sum of its parts.” Amb. Nuland stressed the importance of the deal in supporting “hundreds of thousands of new and better-paying jobs” while “[advancing] the kind of open, rules-based public commons in which our nations thrive.”

Amb. Nuland also assured European allies troubled by recent NSA spying allegations that “the president is determined to get the balance right between our citizens’ security and their privacy… But make no mistake: the intelligence work we do — much of it jointly with Allies and partners — has foiled terrorist plots on both sides of the Atlantic and kept us all safer.”

Among other topics, Amb. Nuland discussed the success of the European Union’s Eastern Partnership, and encouraged the transatlantic community to “finish the democratic map of Europe” by neutralizing corruption, a “pernicious killer of democratic dreams.”

Her speech also touched briefly on bilateral relations between the United States and Russia.  While Amb. Nuland noted that the two nations disagree on a number of issues, including freedom of the press, political freedoms, and the LGBT community, she also stressed, “when we can find common purpose with Russia, the whole world benefits… we can’t stop working to find areas where we can bring Russia to the table.”

At the close of her remarks, Amb. Nuland reiterated the need for a new era of transatlantic cooperation: “Those who want to live in peace and freedom around the world are looking to us… For almost seventy years the Transatlantic community has been the rock on which the world order rests. Our challenge, on both sides of the Atlantic, is to ensure that remains the case.”