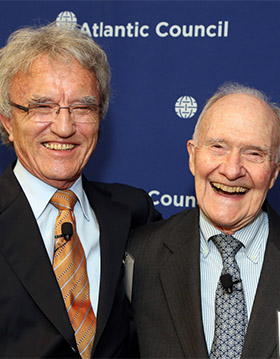 A panel discussion on the Origins of a Europe Whole and Free stepped back from the current issues facing the transatlantic community to reconsider the decisive moment of European history in 1989-1990, when the Berlin Wall was toppled and, within months, the entire edifice of Eastern Europe’s communist rule. The former national security advisors of the United States and Germany, Brent Scowcroft and Horst Teltschik, joined Dutch Foreign Minister Frans Timmermans and moderator Jim Hoagland of the Washington Post in the conversation, in which this history became a lens for viewing the recent months’ crisis in Ukraine.


Scowcroft noted that the administration of President George H.W. Bush focused around 1989 on the idea of Europe whole and free. As a part of this policy, the US government worked to reward those Eastern and Central European countries that liberalized their political structures. This meant that Poland, which had begun negotiating that year with the Solidarity labor union, would now play a key role for US foreign policy in Europe.

Teltschik recalled the significance of  President Reagan’s attempts to engage the Soviet Union on arms control and arms reduction in the mid-1980s. According to him, these moves altered the climate of the Cold War. Germany was supportive of these efforts, which it viewed as a chance to end the deadlock with the Soviet Union. The eventual success of that engagement, Teltschik said, suggests the wisdom now of thinking not only how to deter Russia, but also how to cooperate with it. He said the European Union has failed to adequately engage Russia on matters such as free trade. On the current Ukraine crisis, Teltschik suggested that the West will not be able to change Russia’s incorporation of Crimea.

Timmermans remarked that the Soviet Union had a tendency to sometimes make tactical decisions that would hurt them strategically – pattern that he said applies to Vladimir Putin today. Putin is a great tactician but he tends to act based on intuition as he works to build a kind of recreation fothe Soviet Union, Timmermans said.

Timmermans cautioned against overreacting against Russia or reverting to Cold War mode of thinking. He encouraged NATO to provide absolute assurance to all of its member states of the reliability of Article Five of the NATO Treaty, which declares that an attack on one member is an attack on all.  Timmermans echoed calls by US Secretary of State John Kerry and other speakers at the conference for NATO states to invest more on collective defense in the short term. In the medium term, he noted that the broad economic agreement under negotiation among governments in Europe and North America, the Transatlantic Trade and Investment Partnership, can serve, if completed, as a geostrategic tool, not just an economic one.

Timmermans also joined other speakers in urging the EU to work vigorously to reduce its dependence on Russia for energy, notably natural gas. That effort must include the United States, which is bringing new natural gas production on stream.

Russia’s actions in Ukraine mark a tectonic shift in Moscow’s relations with the West, Timmerman said. That change will endure even if Russia stops destabilizing Ukraine, he said. As the West responds to Russia’s attacks on its neighbor, it cannot use military force, Timmerman said, but only economic means,which should be applied gradually.

In response to questions, Scowcroft also stressed the importance of using economic tools in managing the crisis. The US and the EU should work together with Russia to find an economic structuring plan for Ukraine, he said. All panelists agreed that it would not be a good idea for Ukraine to seek NATO membership.