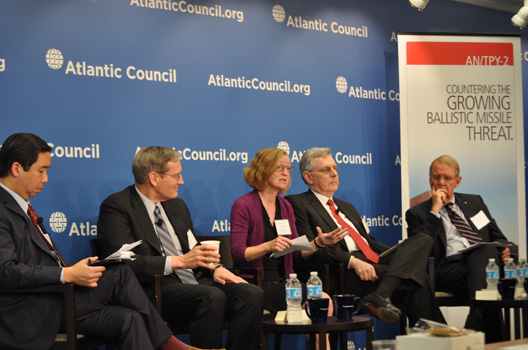 Dan Chiu, Deputy Director of the Brent Scowcroft Center and moderator of the panel, emphasized the importance of innovation, but only when matched with adaptability: “Because it doesn’t matter how innovative we are – if we see this change and we can’t adapt missile defense sufficiently, we’re not going to be dealing with the change effectively.”

Capability: The need for integrating the latest technologies.

According to Pat O’Reilly, Brent Scowcroft Nonresident Senior Fellow and former Director of the Missile Defense Agency, while the effectiveness of our missile defenses in the near-term future is adequate to deter current missile threats, “the effectiveness of missile defenses in the long-term future is unlikely” due to the growing threat of the saturation of missile attacks. Our only option, according to O’Reilly, is to develop and deploy directed energy weapons when they are ready in the future.

Rebecca Grant, President of IRIS Independent Research, focused less on directed energy as the only solution and instead emphasized the need for a more concerted push to integrate new technologies in the concept of operations and fully integrate missile defense across all military services as part of their mission spectrum.

Despite tremendous progress, particularly in sea-based missile defense and in other areas, Grant argues that to gain success in this mission area, we need to concentrate not only on the great strides we made in the ascent and terminal phases, but we need to get back to the early intercept and to attack operations.

Joseph W. Dyer, Chief Strategy Officer at the National Spectrum Consortium and former Commanding Officer of the US Navy’s Naval Air Systems, took a more strategic approach to future capabilities. Positing whether our technology and programs marry to future US engagement or disengagement from the world, Dyer asked, “Does our technology and do our programs marry to each of these strategies in one-size fits all or must we look at different capabilities to marry with different future strategies?”

Reliability: ‘If you don’t do the up-front systems engineering, you’re doomed.’

Although preparation for tests is quite useful, it is critical, according to J. Michael Gilmore, Director of Operational Test and Evaluation at the Department of Defense, that we test these systems under the conditions that they will actually be used to the extent we can create those conditions. Gilmore noted, “The failures we’ve seen over the last several Ground-based Midcourse Defense (GMD) flight tests could have never been predicted by modeling and simulation,” he said. “If you don’t do the up-front systems engineering and you don’t do live testing, you don’t know if your system will work, especially in a complex environment.”

“The best innovation and even the most adaptable systems or processes will be completely negated by failure of systems or failure of capabilities,” stated Chiu. Addressing the relationship between capability and reliability, Chiu asked the panelists whether there is a balance that can be struck between imperatives of geopolitics and near-term emerging threats and the time it takes to go through the processes we normally use to go through testing and evaluation.

Gilmore responded, “If you think you can bolt things together and they’ll work when they’re complex systems, our experience has been it’s just not going to happen.” Gilmore added, “You have to use judgement on how much testing is enough. You have to set priorities.”