His Excellency Radoslaw Sikorski, the Polish Foreign Minister, spoke today at the Atlantic Council as part of the Council’s Global Leadership Series.  He praised continuing U.S.-Polish cooperation and solidarity, noting Poland’s “traditional affinity” for the U.S.

Discussing NATO, Sikorski stated that “vision and resolve are badly needed on both sides of the Atlantic.”  He stressed not only that NATO’s credibility is at stake in Afghanistan, but also that member states should restore the organization’s role as a military alliance.  In the face of recent Russian resurgence, Sikorski called for NATO to refocus its efforts on allied territory and said that providing security for member states should be the alliance’s primary responsibility.  He also said that the EU should use its economic weight as Russia’s largest market to enact better regulation of Russian companies.

Sikorski congratulated President-elect Obama, urging him and his administration to continue plans for installing components of the European missile defense system in Poland.  Poland is prepared to offer industrial monitoring and frequent inspection of the site as part of a package of confidence-building measures to address Russia’s skepticism about the project. 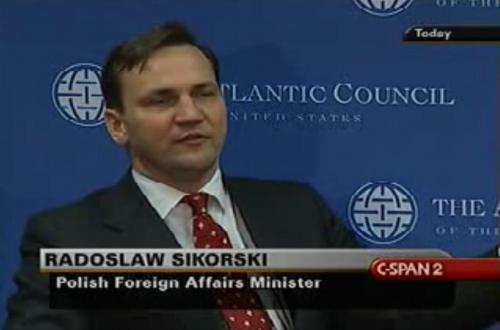