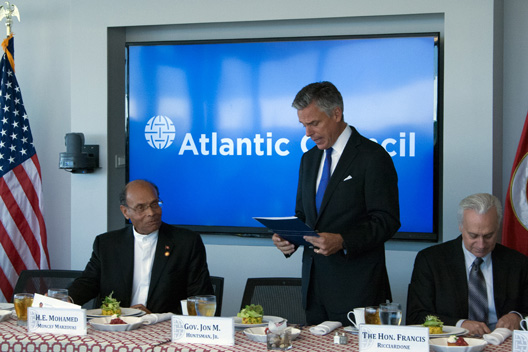 The Atlantic Council hosted a private, high-level luncheon for His Excellency President Mohamed Moncef Marzouki to discuss the need for greater US and EU support for Tunisia’s transition. Among the participants were representatives from the US Congress, US Government agencies, international financial institutions, and private industry.

The dynamic conversation drew on President Marzouki’s earlier public remarks at the Council about the importance of investing in Tunisia to ensure its political and economic success and security.

The discussion touched on terrorist threats that Tunisia faces, particularly in light of growing instability in neighboring Libya, and possible areas of assistance from the United States and Europe. The participants also considered what steps Tunisia must take to establish a more competitive market to attract foreign direct investment and create jobs. Marzouki acknowledged his country’s achievements and challenges, emphasizing that small but critical amounts of support for Tunisia would go a long way in realizing a secure and stable Arab democracy, which would in turn reverberate with positive impact throughout the region.

On the sidelines of the US-Africa Leaders Summit, the luncheon was hosted by the Atlantic Council’s Rafik Hariri Center for the Middle East and the Africa Center in an effort to elevate the discussion about Tunisia among Washington’s policymakers.