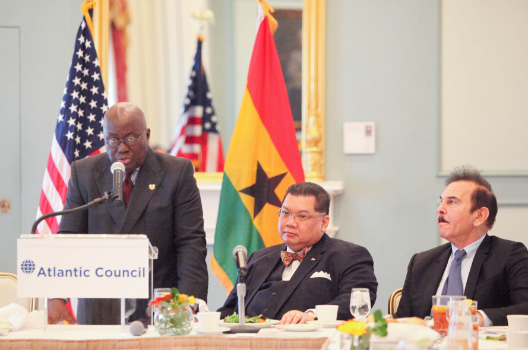 On Friday, March 2, 2018, the Atlantic Council’s Africa Center hosted a luncheon in honor of His Excellency Nana Addo Dankwa Akufo-Addo, President of the Republic of Ghana.

In his remarks, President Akufo-Addo highlighted the common bonds between Ghana and the United States, insisting that the relationship should continue to receive “our full attention and support.” While addressing issues of poverty and development, President Akufo-Addo articulated his country’s commitment to democratic values, citing Ghana’s economic progress under democratically-elected governments over the past twenty-five years. The president noted that, in that time, Ghana has seen government led by one political party peacefully transfer power to administrations led by another party on three different occasions, following elections organized under the constitution.

Just days before Ghana celebrates its 61st Anniversary of Independence, the president stated that Ghana has acted as a “beacon in the development of democratic processes on the [African] continent.” However, President Akufo-Addo pointed out that “the Ghanaian people are still much poorer than they should be sixty years after independence” due to poor policy decisions and political turmoil. He then enumerated his government’s actions to solve this issue by strengthening sound macroeconomic policies, cracking down on corruption, and imposing fiscal discipline. Having significantly decreased state debt and increased projected growth from 3.3 to more than 8 percent in just over a year, the president illustrated his vision for Ghana to become the fastest growing economy in the world—a rich country imbued with the spirit of independence and self-sufficiency.

The president also thanked the Africa Center, noting that Dr. Pham and the Atlantic Council are “not fair-weather friends: they invited me here when I was [the] leader of the opposition, and they brought me back here as President. So, they are even-handed.”