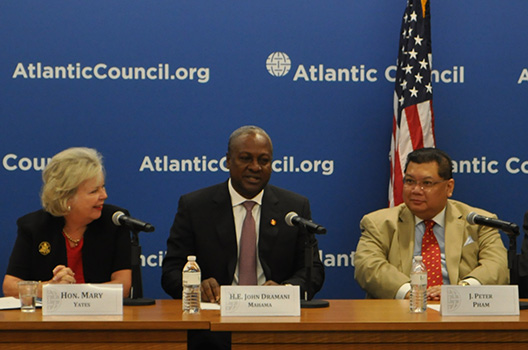 In her opening remarks, Atlantic Council Board Director Mary Carlin Yates, who served as US ambassador to Ghana from 2002 to 2005, highlighted Ghana’s rise as a stable democracy and economic powerhouse in West Africa, as well as moderated the discussion following President Mahama’s remarks.

The prospect for greater integration among West African nations was a theme of President Mahama’s remarks. President Mahama—who was recently elected as the 24th chairman of the Economic Community of West African States (ECOWAS)—outlined his vision for a more interconnected region, and expressed his strong belief that collaboration with neighboring countries on a range of issues, from broader economic integration to continued military cooperation, is key for a more prosperous West Africa.

The discussion centered on a range of economic issues. One of the primary points of discussion concerned the oil and gas discoveries along the coast; special attention was given the potential growth of Ghana’s energy sector, and on how revenue generated from these newfound resources will impact the domestic and regional energy market, as well as the Ghanaian economy. There was also focus on recent macroeconomic setbacks in Ghana and how the government’s approach to tackling the resulting challenges. The signing later the same day of a second Millennium Challenge Compact between the United States and Ghana was also discussed.

The event was attended by current and former US government officials as well as representatives of the private sector and civil society.