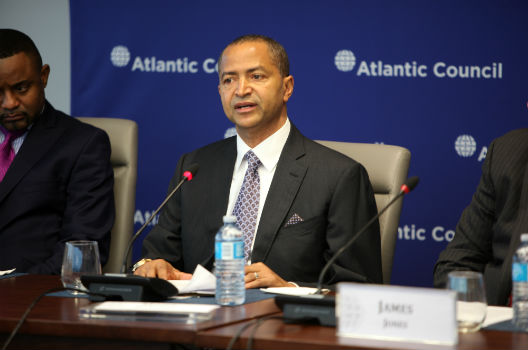 On Tuesday, November 29, the Atlantic Council’s Africa Center hosted Moϊse Katumbi joint opposition candidate for the presidency of the Democratic Republic of the Congo (DRC) and former governor of Katanga Province, for a roundtable discussion on the evolving political situation in the country.

In his remarks, Katumbi provided an update on recent events in the country in light of the rapidly approaching expiration of President Joseph Kabila’s second and final mandate on December 19. Katumbi reminded the audience that over the last year, the Kabila regime has failed to take a single step, physical or administrative, in preparation of elections mandated by the country’s constitution. Instead, the regime violently repressed opposition political parties, civil society, and the media.

According to Katumbi, Kabila’s strategy thus far has been to organize an “artificial and false” national dialogue that has culminated in a “unilateral agreement,” which delays presidential elections until 2018, lacks a precise date for when these elections will occur, and fails to acknowledge the constitutional provision barring Kabila from running for a third term.

Katumbi also laid out his position, calling for a formal promise from Kabila that he will step down as president on December 19th and several additional steps aimed at relieving political tension and increasing the public’s trust in the political negotiation. Finally, he called on the United States and the international community to support a democratic transition of power in the DRC by maintaining and event stepping up pressure on the regime, including targeted sanctions against individuals complicit in either the illegal holding on to power or repression of peaceful protests.

Other participations in the discussion included current and former US government officials, as well as representatives of US and foreign civil society organizations.