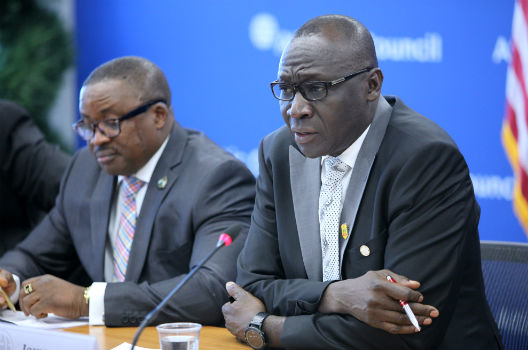 Hamakim remarked on Boko Haram’s continued threat to Nigeria’s security and emphasized the importance of US security assistance in securing the Nigerian military’s tenuous gains. Ahmadu then gave an overview of multiple recent Nigerian army operations, including Operation Gama Aiki, a joint offensive operation with Cameroon, Chad, and Niger, and rescue operations, including the capture of Boko Haram’s “Camp Zero,” which led to the liberation of more than 30,300 abductees. Despite these successes, the panel remarked on Boko Haram’s ability to cross borders to avoid capture, and the group’s worrying employment of children as suicide bombers. They noted serious equipment gaps and deficiencies that they hoped the United States could fill.

The discussion that followed focused on how to provide basic services to communities liberated from Boko Haram control, the linkage between Boko Haram and the Islamic State, the impact of Boko Haram’s ideology on its recruitment practices, and the need for further equipment and services from the United States. Some participants also voiced concerns about reported instances of human rights violations.

Among those in attendance were General Carter Ham, USA (ret.), former commander of US Africa Command; the Honorable Dan Mozena, senior coordinator on Boko Haram for the US Department of State; and Amanda Dory, deputy assistant secretary of African affairs for the US Department of Defense. Other participants in the discussion included current and former US government officials including former US Ambassadors to Nigeria, John Campbell and Robin R. Sanders, as well as representatives of US academic and civil society organizations.