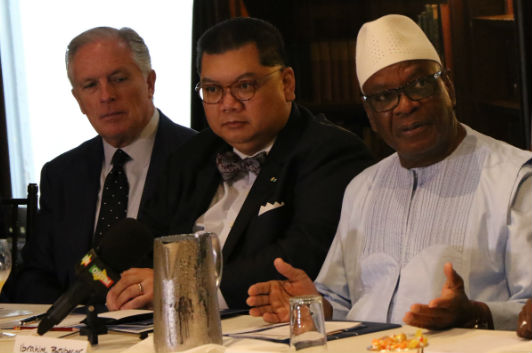 On Wednesday, September 20, the Atlantic Council’s Africa Center hosted a roundtable discussion with His Excellency Ibrahim Boubacar Keïta, President of the Republic of Mali.

In his remarks, Keïta thanked international partners for their efforts to bring peace and security to Mali. He stressed that foreign military intervention in Mali has brought stability to the country and allowed it to get back on its feet after the 2012 coup d’état. Keïta spoke at length about the importance of international cooperation and partnerships, pointing to the many agreements Mali has made with its neighbors to combat cross-border terrorism and organized crime in the region. In addition, Keïta stressed the importance of the Group of Five Sahel States in pooling multinational resources to combat regional economic and security issues.

The Malian delegation also included H.E. Boubou Cissé, Minister of Economy and Finance; Hon. Karim Keïta, Chairman, Commission on National Defense, Security, and Civil Protection; Hon. Moustapha Ben Barka, Deputy Secretary General at the Office of the President; and H.E. Issa Konfourou, Permanent Representative of Mali to the United Nations, among others. Also in attendance and participating in the roundtable were Atlantic Council Board Directors Ambassador Mary Carlin Yates, Former Special Assistant to the President and Senior Director for African Affairs and Special Assistant for Strategic Planning at the National Security Council, and Mr. Ahmed Charai, Chairman, Maroc Télématique; Atlantic Council International Advisory Board Members Mr. Mehmet Nazif Günal, Founder, Chairman of the Board, and President, MNG Group of Companies, and Mr. Tewodros Ashenafi, Founder, Chairman, and CEO, Southwest Holdings; and a number of US and non-US government officials, business leaders, and civil society actors.