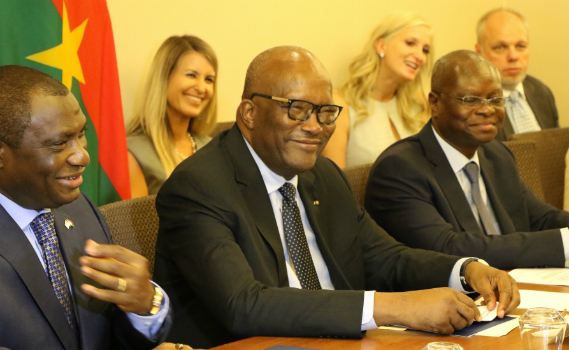 On Monday, September 18, the Atlantic Council’s Africa Center, in partnership with the US Chamber of Commerce, hosted a roundtable discussion with H.E. Roch Marc Christian Kaboré, President of Burkina Faso.

In his remarks, Kaboré reaffirmed Burkina Faso’s commitment to promoting justice, the rule of law, and shared prosperity for its people. He highlighted the ongoing implementation of the National Economic and Social Development Plan, which seeks to structurally reform the Burkinabe economy to achieve strong, sustainable, and inclusive growth for all. Kaboré also underscored the success of his country’s burgeoning mining sector, which has contributed substantially to Burkina Faso’s economic upswing in recent years, as evidence of his country’s increasing attractiveness to foreign investors.

In response to the August 2017 terrorist attacks in Ouagadougou, Kaboré underscored that Burkina Faso is doing everything it can to curb the evolving threat of terrorism, with a particular focus on the country’s north. The president further reaffirmed his country’s commitment to the Group of Five Sahel States to combat cross-border terrorism and organized crime in the region.