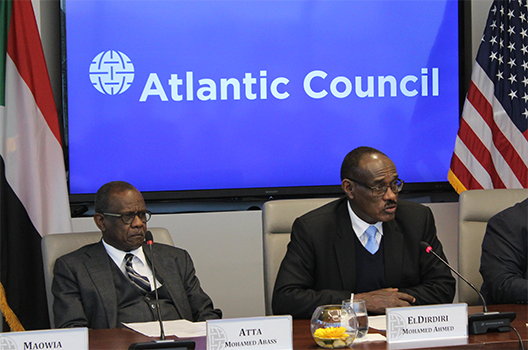 On November 7, the Atlantic Council’s Africa Center hosted a roundtable discussion featuring H.E. Dr. ElDirdiri Mohamed Ahmed, minister of foreign affairs of the Republic of Sudan, on the state of US-Sudan relations, as well as recent efforts by his government to mediate peace in South Sudan and the Central African Republic.

In his remarks, ElDirdiri expressed that US relations with his country were “moving in the right direction,” despite continued sanctions on Sudan stemming from its designation by the United States as a State Sponsor of Terrorism. He highlighted the successful completion of the first phase of rapprochement between Sudan and the United States, which resulted in the lifting of significant economic sanctions and the ending of a trade embargo in October 2017. ElDirdiri was hopeful that the second phase of negotiations would result in a removal of the remaining sanctions on Sudan.

ElDirdiri also explained Sudan’s regional policy, arguing that his country has been a strong partner in US counterterrorism efforts and made proactive efforts to solve regional crises, highlighting his country’s mediation attempts in the Central African Republic and South Sudan. ElDirdiri expressed his full support of the latest peace deal between South Sudanese leaders Salva Kiir and Riek Machar.

A discussion followed the minister’s remarks in which participants engaged ElDirdiri on recent economic reforms in his country, the sustainability of the latest peace deal in South Sudan, and the activities of other powers–such as China, Russia, Turkey, and the European Union–in the region.