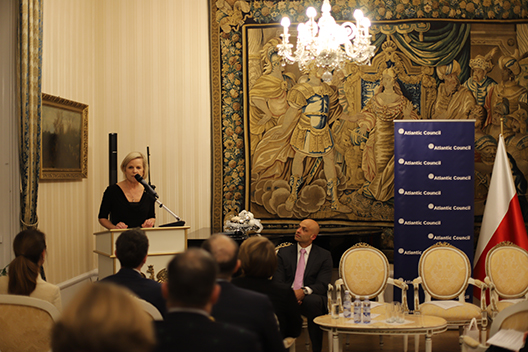 On December 6 the Atlantic Council Northern Europe Office, in cooperation with the Embassy of the Republic of Poland in Stockholm, organized a seminar titled ”NATO at 70: How to Navigate in A Turbulent World”. The seminar was attended by experts representing both Swedish governmental institutions, the Stockholm diplomatic corps, and think-tanks.

The closed half-day seminar, under Chatham House rules, was opened with a keynote speech by James Appathurai, Deputy Assistant Secretary General for Political Affairs and Security Policy and NATO Secretary General’s Special Representative for the Caucasus and Central Asia.

The first panel focused on NATO’s main challenges ahead, including the status of the transatlantic relationship. This panel was moderated by Ms. Anna Wieslander, Director for Northern Europe, Atlantic Council and included Lena Bartholdson, Deputy Director-General and Head of Department for Security Policy and International Relations, Ministry of Defence of Sweden; Andreas Tuvesson, Deputy Head of Mission of Sweden to NATO; Michał Polakow, Deputy Permanent Representative to NATO, Poland; and David Behar, Deputy Chief of Mission, Embassy of France in Stockholm.

The seminar marked the end of a four year period in which the Embassy of the Republic of Poland in Stockholm has served as the NATO Contact Point Embassy. As of January 1, 2019, the British Embassy in Stockholm will take over and serve as the Contact Point for the next two years.

Image: Opening remarks by Anna Wieslander, Director for Northern Europe at The Atlantic Council. Photo by The Embassy of Poland in Stockholm