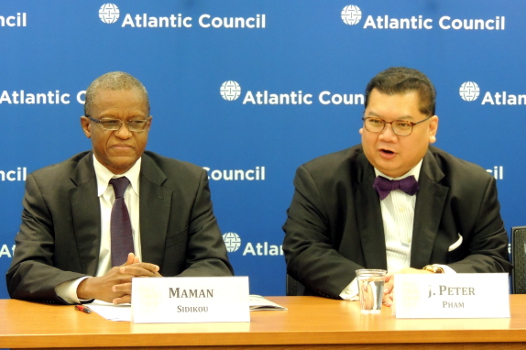 On Monday, October 5, the Africa Center hosted a roundtable discussion with Ambassador Maman Sambo Sidikou, Special Representative of the Chairperson of the African Union Commission and Head of the African Union Mission in Somalia (AMISOM) for an update on AMISOM’s operations in Somalia as well as recent security and political developments in the country. Sidikou was accompanied by James Gadin, Political Officer and Coordinator of the Office of the Head of AMISOM, and Samira Gaid, Mission Analyst and AMISOM Liaison Officer to the Somali Federal Government and Interim Regional Administrations.

Sidikou, who participated in a transition seminar last September at the Atlantic Council before leaving for his current post, was optimistic in his assessment of Somalia’s progress on the consolidation of peace and state-building efforts. However, he noted two major challenges to the consolidation of peace and security: discord between the executive and legislative branches, evidenced most recently by a motion of impeachment against President Hassan Sheikh Mohamoud by members of Parliament; and the integration of the Somali National Army and police.

The discussion, moderated by Pham, centered on the importance of intelligence in degrading al-Shabab’s capabilities, allegations of civilian casualties and sexual abuse against AMISOM troops, and Somalia’s upcoming presidential elections.