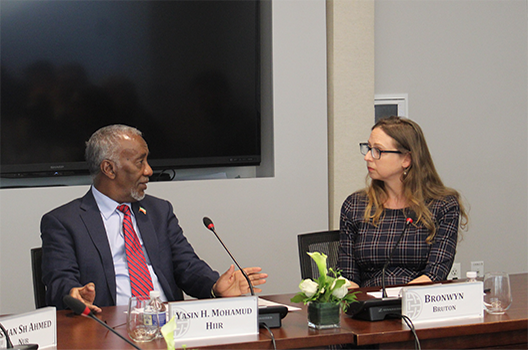 On December 5, the Atlantic Council’s Africa Center hosted a roundtable discussion with Dr. Yasin Hagi Mohamud Hiir “Faratoon,” minister of foreign affairs and international cooperation of the as-yet unrecognized Republic of Somaliland, on his administration’s role in the shifting diplomatic, economic, and security landscape of the Horn of Africa.

In his remarks, Faratoon presented Somaliland as an island of stability in an increasingly volatile region. He highlighted Somaliland’s democratic mode of governance, referencing the numerous presidential, parliamentary, and district-level elections that have been successfully orchestrated since it declared independence from the Federal Republic of Somalia in 1991. Faratoon also discussed Somaliland’s efforts to integrate into the regional economy, touting its partnership with the United Arab Emirates to substantially upgrade the Port of Berbera and develop a free economic zone to attract manufacturing firms and create much-needed jobs.

Ms. Bronwyn Bruton, Africa Center director of programs and studies and deputy director, moderated the ensuing discussion in which participants engaged Faratoon on the Puntland–Somaliland dispute, oil and gas exploration, and the effects of Chinese, Russian, and Gulf State interests in Somaliland and the wider region.