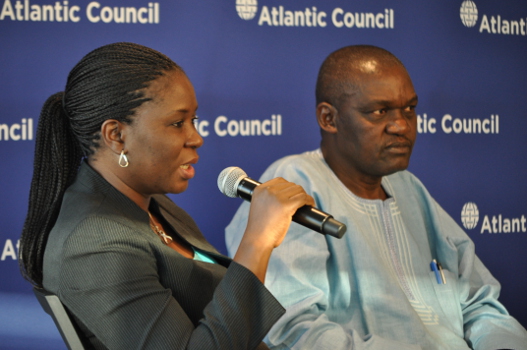 On Wednesday, November 12, the Atlantic Council welcomed Chom Bagu, Search for Common Ground’s (SFCG) Nigeria country director, and Mausi Segun, Human Rights Watch’s (HRW) Nigeria researcher and analyst, for a discussion on security and human rights challenges in Nigeria. The discussion was cohosted by the Center for Strategic and International Studies.

After welcoming attendees, Africa Center Deputy Director Bronwyn Bruton highlighted recent terror attacks in Nigeria, including this week’s suicide bombings at a school and teacher’s training college that came on the heels of President Goodluck Jonathan’s announcement that he will seek re-election in 2015.

In his remarks, Bagu criticized the Nigerian military’s inability to contain Boko Haram, whose territorial control of towns in northeastern Nigeria has expanded dramatically in recent weeks. Rising insecurity in the northeast has increased the number of Internally Displaced Persons (IDPs) and threatened the livelihoods of many Nigerians who now require urgent humanitarian assistance. The prevailing insecurity may also make the holding of credible presidential elections in that region in 2015 impossible.

Segun then offered a debrief of HRW’s recent research in northern Nigeria. Since 2009, she estimated that some 7,000 civilians have died in the insurgency, though whether at the hands of the military or Boko Haram, it is impossible to determine. Women and girls are especially vulnerable to the conflict; this year alone, close to 500 have been abducted from their homes or schools, or snatched off the street. Segun suggested that the abductions do not stem from Boko Haram’s ideology, but rather are a tit-for-tat retaliation for abuses—many confirmed by HRW—committed by the Nigerian military against Boko Haram families.

Segun finished by emphasizing that the Civilian Joint Task Force, a loosely-organized vigilante group formed in response to Boko Haram, has also—despite its beginnings as a self-defense force—committed atrocities and must be held accountable.

Jennifer Cooke, director of the Africa Program at the Center for Strategic and International Studies, moderated a question and answer session during which Segun and Bagu identified other factors exacerbating instability, such as the government’s lack of political will to solve the conflict, entrenched corruption, and inadequate accountability and social services in the areas in which Boko Haram operates. Bagu and Segun agreed that military action alone will not defeat the group, and emphasized the need for Nigerian security forces to work in collaboration with traditional communities and religious leaders to foster sustainable security.