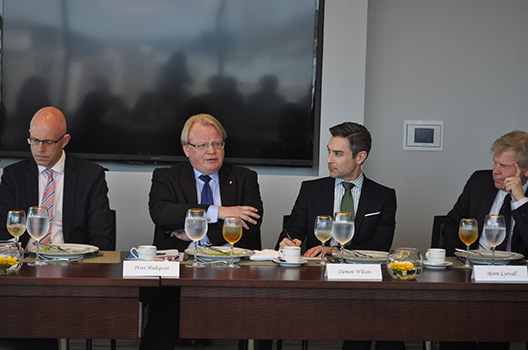 On May 20, the Atlantic Council’s Brent Scowcroft Center on International Security hosted a discussion on “Sweden’s Role in the Nordic-Baltic Region and the Transatlantic Relationship” with Sweden’s Minister of Defense Peter Hultqvist and experts from the Atlantic Council.

Minister Hultqvist visited the Council against the backdrop of increased tensions in the Nordic-Baltic region. The Swedish government recently announced an increase in the defense budget over the coming five years, a notable break with a long term trend with cuts and closings of bases and layoffs of military personnel. The increased budget is meant to allow the Swedish armed forces to hold more exercises, bolster its presence in the Baltic Sea, and upgrade key defense capabilities. In September 2014, Sweden signed a Host Nation support agreement with NATO, bolstering the ability of NATO to deploy troops on Swedish soil in the event of exercises and other activities. The government also announced increased military cooperation with its Nordic neighbors Finland, Denmark, Norway and Iceland. The agreement focuses on increasing joint military exercises in the region, enhancing cooperation in the industrial sector, expand sharing of intelligence and joint processing of cyber-material. The discussion with the Minister highlighted importance of these recent announcements, analyzed the implications and consequences for Nordic-Baltic security, examined how a newly assertive Russia is impacting regional security, and covered Sweden’s evolving relationship with NATO.