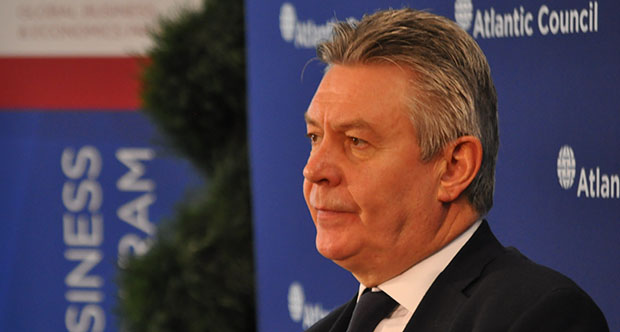 Eight months after opening negotiations on what would be the world’s biggest-ever trade agreement, the United States and the European Union “need to step up” their effort, especially on the tough task of trying to harmonize government business regulations across the Atlantic, said Europe’s top trade negotiator.

European Trade Commissioner Karel De Gucht spoke to business and government leaders at the Atlantic Council fresh from two days of talks with his US counterpart on the Transatlantic Trade and Investment Partnership (TTIP). In those talks, “the next phase is going to be harder,” De Gucht said. “This is where real negotiations begin. If we want to finish on the now-proverbial single tank of gas, our message to our negotiators now is that we need to step up a gear.”

The transatlantic deal would create a free-trade zone that would embrace 47 percent of the world’s gross domestic product and lead to the creation of an estimated 740,000 jobs in the United States alone, said Atlantic Council Chairman Jon Huntsman, who introduced De Gucht. An EU-commissioned study found that such a deal could let the US economy generate an extra $130 billion, or $900 per American family, each year, De Gucht’s office says.

While such a massive free-trade area is proving a politically difficult ambition both for the Obama administration and the EU leadership, De Gucht said it has the potential to preserve US-European economic and political leadership deep into the 21st century, amid the rise of new international powers in Asia, Latin America and Africa. With the growth of other economies, “by 2050, our share of world output could drop by as much as half,” De Gucht noted. This trade deal would strengthen the US and its allies in sustaining the “rules-based international system” and the West’s “high standards for health, the environment, labour and consumer protection,” he said.

The Obama administration and the EU leadership are trying to complete the agreement this year, but both face domestic political resistance, notably from groups that say it could undermine governments’ abilities to control their own consumer, environmental or fair-labor regulations. President Obama is having difficulty obtaining Congress’ agreement to give him special “fast track” authority to negotiate a deal on which the legislature then would have only a final up-or-down vote.

Traditional free-trade agreements have focused on reducing tariffs, or import taxes, and other direct government barriers to international trade. And the current talks are progressing in those areas, de Gucht said. “This week we exchanged our first … offers” to reduce tariffs, and the two sides are close to exchanging their formal proposals for easing trade in services, he said.

But this proposed deal is more ambitious than any previous such effort because it is wading into the much more complex, politically volatile chore of “reducing [US and European] regulatory differences to facilitate trade,”  said De Gucht, a former Belgian foreign minister who has led European trade policy for the past four years. Unnecessary bureaucracy can add 10 to 20 percent to the cost of goods traded across the Atlantic, the EU has said.

The US and European economies will benefit from new rivers of trade if “just to give some examples, we can make our car safety standards fit together better …  implement agreed international rules on finance in a compatible way, … simplify the procedures for approving food products, and avoid duplication of inspections in areas where our product safety rules are equivalent,” De Gucht said.  Some US and European industries, such as auto manufacturing and chemicals are already closer than others in regulatory terms, he said.

De Gucht and former US Treasury Secretary Robert Kimmitt, an Atlantic Council board member who moderated questions from the audience, both said that one of the toughest parts of the proposed deal will be harmonizing the regulation of finance between the US and Europe.