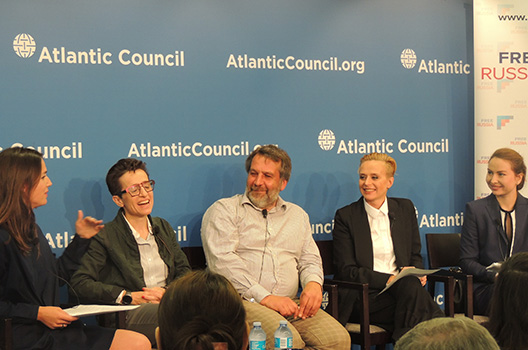 On May 23, 2016, the Atlantic Council’s Dinu Patriciu Eurasia Center, along with IREX and the Free Russia Foundation, hosted a paneled event discussing the nature of modern Russian propaganda.

Manipulation of the media space is a powerful tool in Russia’s nonlinear war on the West. The Kremlin has weaponized TV, news, and social media by spreading disinformation, which portrays the West as hypocritical, declining, and seeking to dominate the global order. Russia’s propaganda manipulates national and international media, confusing and distracting citizens and policymakers. This campaign erodes global support for Western multilateral institutions and liberal democratic values. The West’s response to this growing threat to global security has, so far, been tepid and uncoordinated. As a result, the space for alternative Russian-language news continues to shrink.

The panel consisted of journalists who have experience challenging this state-run monopoly: Russian journalists, Masha Gessen and Vasily Gatov, and Ukrainian journalists, Daria Dieguts and Natalka Pisnya. The event was moderated by Karina Orlova, a journalist with Echo of Moscow. With their diverse experiences with Russian propaganda and media control, the panel painted a holistic portrait of how the Kremlin is able to shape crucial media narratives surrounding Ukraine and Syria in particular.

Panelists discussed the nature of this propaganda and its role in nonlinear hybrid warfare as well as the steps which should be taken to counter the industrial scale disinformation machine run by the Kremlin. Masha Gessen, renowned author and Russian political exile, summed up the purpose and effect of Russian propaganda, saying, “The greater impact is that it [Russian propaganda] creates an atmosphere where all news is subject to questioning.”