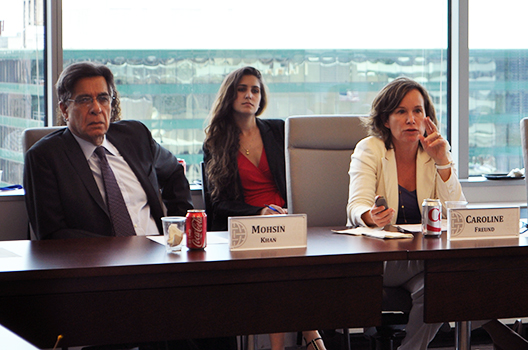 Countries that undergo regime change often see economic improvements, but this is not always the case when change leads to democratization, according to a study on the relationship between democracy and growth by Senior Fellow Caroline Freund of the Peterson Institute for International Economics and Mélise Jaud, a senior economist at the World Bank. The Atlantic Council’s Rafik Hariri Center for the Middle East hosted Freund to discuss her recent paper, “Regime Change, Democracy, and Growth.” Hariri Center Senior Fellow Mohsin Khan moderated the discussion.

Freund began by posing the question whether democratic transitions have a positive effect on economic growth in the Middle East. Her study with Jaud examined 158 countries around the world that have undergone political transitions from 1960-2011, in an attempt to understand the specific growth effect of democratic transition from that of broader regime change. The wide-ranging spectrum of transitions, characterized as either successful, failed, or gradual (as measured by a polity score) indicates that there is a positive correlation between political transition and swift regime change, but not necessarily democratization. The study’s findings also offer new evidence of the importance of a swift transition to ensure economic growth.