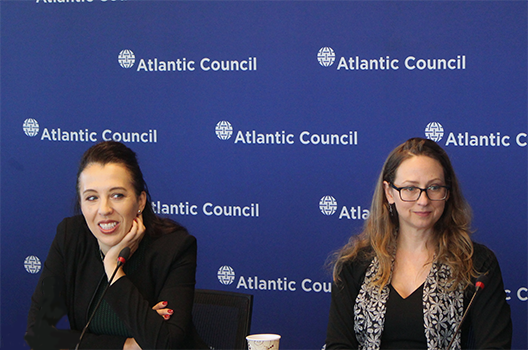 In her introductory remarks, Hruby stressed that The Better Utilization of Investments Leading to Development (BUILD) Act is a once in a generation opportunity to reassert US competitiveness in emerging markets. In Africa, the new USDFC will be critical to countering China’s growing economic clout and could help solve a growing employment crisis, while also supporting US businesses investing on the continent. Hruby shared the recommendations from her publication, focusing on the new USDFC’s ability to operate in the informal sector, invest in industries that complement US competitiveness, and foster innovation in development finance.

After her remarks, Hruby opened the discussion to participants from the private sector and multiple US agencies, many of whom played a substantial role in the drafting and passage of the legislation.

The ensuing discussion highlighted several challenges that the new USDFC must overcome. Among others, participants discussed the challenge of gaining access to capital in informal markets, which encompass about two thirds of employment across Africa. To reach a considerable part of the economy and to have a meaningful development impact, the future USDFC must create mechanisms to supply the informal sector with capital despite the risks inherent in informality.

Participants also stressed that the USDFC will need to accelerate the pace at which deals can turn into commercially viable projects, and that innovation will be essential to the USDFC’s ability to keep up with Chinese investments. Hruby asserted that the USDFC must target industries where the United States has a competitive edge, such as finance, venture capital, management services, and entertainment, and seek out industries in which it can build footholds and scale up to reach commercial viability.

Among those in attendance were Atlantic Council Board Director Amb. Reuben E. Brigety II, former US ambassador to the African Union, Mr. Rob Mosbacher, chairman of Mosbacher Energy Company, and a number of representatives from the Overseas Private Investment Corporation, the US Agency for International Development, and private equity and advisory firms working in African markets.