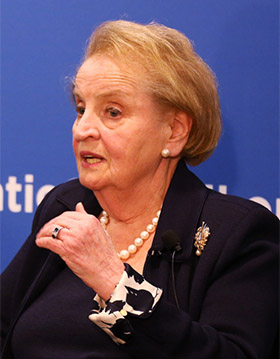 Democratic, Republican Foreign Policy Leaders on US Role in the Struggle for Europe’s East

A Democratic former secretary of state and a Republican former national security advisor agreed today that President Obama, Congress and the US media should focus on explaining to Americans why Russia’s attacks on Ukraine are a critical problem for a United States whose voters are inclined to withdraw from international affairs.

“I am very troubled” by today’s poll published by the Wall Street Journal, which confirms other surveys showing that “Americans want to worry about themselves … and basically don’t know what our role is” in helping Ukraine and Eastern Europe defend against Russia’s campaign to expand its borders and dominance in the region, former Secretary of State Madeleine Albright told an audience at the Atlantic Council. The Journal poll found 47 percent of Americans preferring a less active US role in world affairs.


Albright noted Americans’ exhaustion with foreign engagements following twelve years of war in Iraq and Afghanistan. A central reason for American uninterest in the Russia-Ukraine crisis is that President Obama has failed to speak prominently and consistently about the threat it poses to US interests, said said Stephen Hadley, the former national security advisor to George W. Bush.

Mobilizing Americans for an international crisis “always takes a president who goes to the American people not once, not twice, but consistently, explaining to the American people why what happens out there matters here, and what we can and need to do about it,” said Stephen Hadley, the former national security advisor to George W. Bush. “When presidents have done that, in a systematic and sustained way, the American people get it … and support it.”

The polls showing American uninterest in Ukraine or other foreign challenges “are in some sense because we have not had this kind of presidential leadership,” Hadley said. “I don’t mean to be critical, but it is a fact. And [former national security advisor to President Jimmy Carter] Zbig Brzezinski was very clear yesterday” in his own remarks at the conference, saying that “the president needs to speak to the country about Ukraine.”

Albright, who led the State Department under former President Bill Clinton, said Congress and US news media share responsibility for Americans’ inattention to the Russia-Ukraine crisis. “Obviously we all believe in Presidential leadership,” she said. “But … we also need leadership in Congress.  We cannot have people who are proud not to have passports.”

And on television, “there is not enough of an explanation to the American people as to how important it is” to deal firmly with Russia’s attacks on Ukraine. “We have now spent zillions of hours – I’m really sorry about the people who were lost in the Malaysian plane, but the bottom line is that what is happening in Ukraine is so much more important for America’s future and there’s no explanation of it.”

“We are exhausted from [12 years of war in] Iraq and Afghanistan,” Albright said, in a way not unlike the exhaustion of European democracies that facilitated the rise of Nazi Germany following World War I. “It is very dangerous. … We have to recognize that ultimately, if nothing is done” to oppose Russian President Vladimir Putin’s aggression, “in the long run we will pay for it.”

Their remarks included these excerpts:

—Albright on whether economic sanctions by the West may deter Putin from further attacks.

“Because Putin is living in his own world, and because he is making up facts, it is hard to know what affects his behavior. But ultimately, I do think it has to be damaging. … Their economy wasn’t in great shape before.”

–Albright on Putin’s sources of domestic political support amid the current conflict.

“Putin’s numbers are up, in terms of popularity,” in part because his nationalist actions and rhetoric appeal to Russians who are dispirited by their country’s decline, she suggested. “There really has been an identity problem in Russia, plus the propaganda in Russia so stunning.  I was listening to Russian TV,” and “one of the narratives is … ‘The people in Ukraine are the fascists, who are the children of the Nazis who killed your relatives during World War II. And therefore, it is essential for you to go in and save your Slavic brothers and sisters.’” For ordinary Russian news consumers, “that’s all that’s out there.”

–Hadley on the US need to lead Europe on the imposition of economic sanctions against Russia.

“We’ve got to do it [impose sanctions] with the Europeans because it’s the Europeans as [European President] Jose Barroso said, that have the big punch, in terms of the relations” with Russia. “We’ll be ahead of them, leading, but not separating from them, because in the end of the day, on the sanctions piece, they’ve got a bigger stick than we do.”