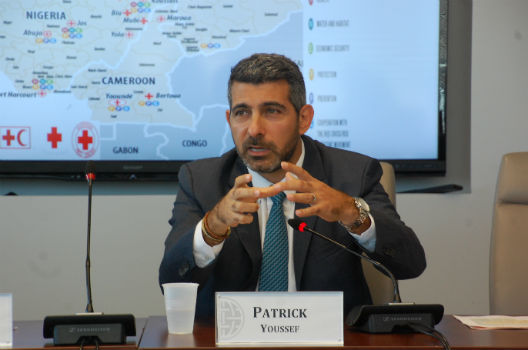 On Thursday, July 13, the Atlantic Council’s Africa Center, in collaboration with the International Committee of the Red Cross (ICRC), hosted a roundtable discussion with Mr. Patrick Youssef, Deputy Regional Director for Africa at the ICRC.

In his remarks, Youssef discussed the complexities of the protracted conflict in the Lake Chad Basin and the neutral, intermediary role that the ICRC has played in previously-inaccessible civilian areas in the region. He spoke in depth about the armed conflict and violence in northeastern Nigeria, which has spilled over to northern Cameroon, western Chad, and south-east Niger, displacing approximately two million people and severely damaging the regional economy in the process. Youssef further emphasized that a primarily military response is not sufficient to curtail Boko Haram insurgents in the region, citing fundamental humanitarian assistance, emergency mental health and psychosocial support, building resilience in vulnerable communities, and prompting transitional justice initiatives as four pillars of what must be a comprehensive, multifaceted solution.

Africa Center Director of Programs and Studies and Deputy Director Bronwyn Bruton introduced Youssef and moderated the ensuing discussion, which included attendees from the US government, the non-profit sector, and academia.