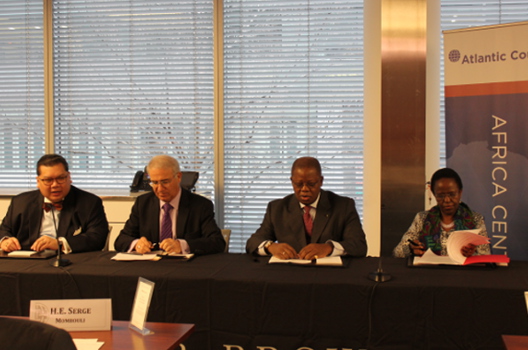 In an era of globalization and expanding commercial ties, Africa offers countries and private industry considerable opportunities for trade and investment. Last August, the White House hosted the inaugural US-Africa Leaders Summit, a gathering of heads of state and government from across the continent. The purpose of the summit was to strengthen and broaden economic and investment links, as well as to reinforce political and security ties, between the United States and African countries.

On Friday, March 27, the Atlantic Council’s Africa Center in partnership with Mayer Brown hosted a conference to assess progress made since the Summit and to identify the best way forward in promoting greater US-Africa trade and investment. After opening remarks by the Honorable Toby Moffett, former Member of Congress and Senior Advisor for Mayer Brown, and J. Peter Pham, Director of the Africa Center, the group welcomed H.E. Rachad Bouhlal, Ambassador of His Majesty the King of Morocco to the United States, who spoke briefly about the importance of and impetus for the event and the need to strengthen commercial ties between the US and Africa.

(Ambassador of H.M. the King of Morocco to the United States H.E. Rachad Bouhlal.)

The Honorable Michael Kantor, former US Secretary of Commerce, former US Trade Representative, and Partner at Mayer Brown, and the Honorable Susan Schwab, former US Trade Representative and Strategic Advisor at Mayer Brown, echoed Bouhlal’s remarks and highlighted the accomplishments of the Summit, as well as recent progress in improving US-Africa commercial relations and obstacles that remain. Kantor introduced the Honorable Grant Harris, Special Assistant to the President and Senior Director for African Affairs on the National Security Staff. Providing the White House’s perspective toward trade with Africa and the African Growth Opportunity Act (AGOA), which is up for renewal this year, Harris stressed that progress in strengthening commercial ties was not only necessary, but also realistic.

(The Honorable Grant Harris, Special Assistant to the President and Senior Director for African Affairs on the National Security Staff.)

For the first panel, Pham moderated a discussion about the state of US-Africa trade policies, focusing on what works and what doesn’t. H.E. Michael Moussa-Adamo, Ambassador of the Gabonese Republic to the United States, opened with a brief discussion of AGOA, the upcoming AGOA Forum to take place in Gabon later this year, and the involvement of the business sector in promoting the Act’s renewal. Bouhlal then spoke about the role of South-South cooperation between and among African countries, highlighting Morocco’s contributions in terms of education, housing, job opportunities, and security to its partners in North and West Africa. Bouhlal also addressed the impact, lessons, and potential improvement of Morocco’s Free Trade Agreement with the United States. H.E. Liberata Mulamula, Ambassador of the United Republic of Tanzania to the United States, then discussed the East African Community’s facilitation agreement with the United States, which was recently signed after negotiations led by the Office of the US Trade Representative, and the benefits for the region and continent to be expected from the deal.

Adding to the perspective of African ambassadors working in Washington, Moffett in the second panel offered his observations as a former Member of Congress, providing context about the domestic political debates that surround improved US-Africa commercial relations and the debate over the renewal of AGOA. Kantor and Schwab used their experience as US Trade Representatives to inform suggestions for the current Congress. Aubrey Hruby, Visiting Fellow at the Atlantic Council’s Africa Center, added insight on the inner workings of the AGOA renewal process inside the US government. Enos Banda, Founder and CEO of Freetel Capital, used his experience leading a South African company to provide lessons learned for other African businesses seeking to trade with the United States. All panelists agreed on the importance of extending AGOA as soon as possible.

Following the panel, the discussion focused on roadblocks to improved commercial cooperation and potential solutions for navigating them.