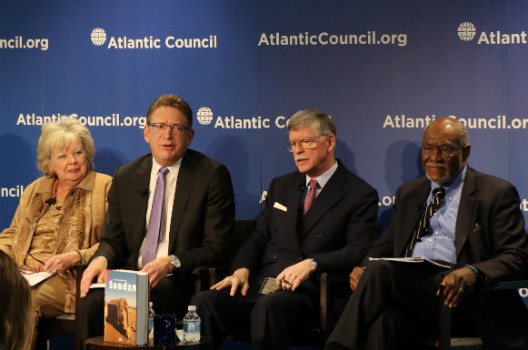 On Thursday, March 8, the Atlantic Council’s Sudan Task Force launched three new issue briefs that make recommendations for the next phase of a measured reengagement strategy for the United States with the Republic of the Sudan. The papers covered three critical, related areas: governance and political reform; economic reform and impediments to investment; and prospects for greater cultural engagement.

Dr. J. Peter Pham, Atlantic Council vice president and Africa Center director, welcomed guests and introduced the new papers, which came out of a task force delegation to Sudan in January 2018, the third such visit in two years.

The panel included Task Force members Ambassador Tim Carney, former ambassador to Sudan and Haiti; Ambassador Johnnie Carson, senior advisor to the president at the US Institute of Peace and former assistant secretary of state for African Affairs; Dr. Jeffrey Herbst, senior fellow at the Brenthurst Foundation and former CEO of the Newseum; Mr. Zach Vertin, visiting lecturer at Princeton University and former director of policy for the US special envoy to Sudan and South Sudan; and Ambassador Mary Carlin Yates, Atlantic Council board director and former US chargé d’affaires to Sudan, who discussed the three papers and their recommendations.

Co-authors of “Sudan: Politics, Engagement, and Reform,” Carson and Vertin argued that Sudan’s long-term political stability requires a reboot of its democratic institutions, improved governance, and greater political participation. They urged the Trump administration to initiate the next phase of US engagement as quickly as possible, including benchmarks that are measurable and achievable. In particular, both Carson and Vertin encourage the Trump administration to increase its diplomatic presence in Khartoum, including, when appropriate, the appointment of a Senate-confirmed ambassador to Sudan. The last US ambassador accredited to Sudan was Carney, who served from 1995 to 1997.

Herbst, the author of “Sudan: Prospects for Economic Re-engagement,” described Sudan’s political economy and reviewed the steps that the United States and Sudan can take to improve economic cooperation. In his remarks, he argued that progress depends on fundamental economic changes inside Sudan—including sharply reducing subsidies, devaluing the currency, reigning in corruption, restraining government intervention in the economy, and directing resources away from the security sector and toward poverty reduction.

As co-authors of “Sudan: Soft Power, Cultural Engagement, and National Security,” Carney and Yates maintained that Washington’s efforts to re-engage with Khartoum on a series of political, economic, and diplomatic matters must be complimented by concerted efforts to engage the country’s twenty-two million youth, who make up nearly 60 percent of Sudan’s total population. Doing so immediately is the United States’ best chance to prevent a “lost generation” of Sudanese youth, with no linkages with or affinity toward the United States—and to avoid the potentially devastating consequences therein.

Kelsey Lilley, associate director of the Atlantic Council’s Africa Center, moderated a discussion with panelists before turning to questions from the audience. The ensuing conversation focused on issues of human rights and religious freedoms; economic measures taken to spur the economy; and the future of Sudan’s political landscape ahead of elections scheduled for 2020.