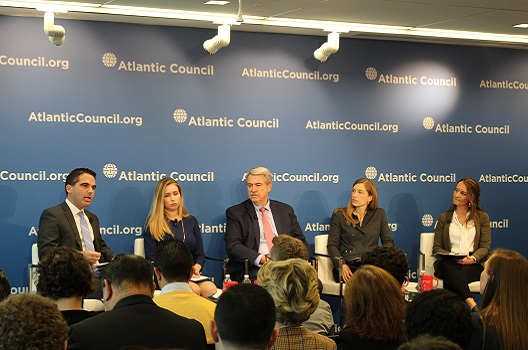 Almost twenty-five years ago, the North America Free Trade Agreement (NAFTA) between the United States, Mexico, and Canada went into force and became a critical part of the North American economy. On Friday, November 30, 2018 these three countries will sign a new, modernized trade deal known as the United States-Mexico-Canada Agreement or USMCA. As did its predecessor, this agreement will impact millions of jobs, trade-dependent communities, and investment in key sectors.

In partnership with POLITICO, the Atlantic Council’s Adrienne Arsht Latin America Center and its Global Business and Economics Center hosted a public event to discuss the USMCA’s implications on consumers and its future in Congress on November 27, just three days before its signing by President Trump, President Enrique Peña Nieto, and Prime Minister Justin Trudeau on the sidelines of the G20 Summit in Buenos Aires, Argentina.

The panel featured experts in key sectors that will be impacted by the agreement including: Undersecretary of Agriculture for Trade and Foreign Agricultural Affairs, Ted McKinney; Megan Cassella, trade reporter for POLITICO; Stephanie Holland, international government and regulatory affairs director for the computing technology Industry Association (CompTIA); and Maria Zieba, director of international affairs for the national pork producer’s council. The panelist discussion and Q&A was moderated by Jason Marczak, director of Atlantic Council’s Adrienne Arsht Latin America Center.

Opening the event, Marczak highlighted the importance of NAFTA to US states; thirty-three of which count Mexico as one of their top-three export markets and thirty-five of which claim Canada as their most important foreign market.  Undersecretary McKinney described the USMCA as a monumental accomplishment providing much-needed aid to the US dairy sector and eliminating Canada’s low-price milk proteins policy, known as Class 7. Describing the forward-looking and current access impact of the agreement he stated, “it gives modest additional access by our dairy markets to Canada, but more importantly it set the rules for the future so that those kinds of things are kept in check.” He then noted the lesser known, but highly important inclusion of a new bioscience and chapter which has enormous potential for crops, livestock, poultry, and human health.

Describing changes within the agreement outside of agriculture and technology, Cassella highlighted the preservation of the Chapter 19 dispute settlement mechanism, anti-dumping and counter veiling duties, as a noteworthy victory for Justin Trudeau. She also noted the reduction of the Chapter 11 investor-state dispute settlement mechanism, as a potential win for both Canada and the US.In regard to the USMCA’s effect on the pork industry Zieba concurred with McKinney and Cassella that the present clauses in the trade agreement would provide benefits to nearly every industry including that of the pork sector. She emphasized the importance of the zero-duty market access maintained by the USMCA, which will enable market stability and integration.

Marczak then moved the discussion to the USMCA’s effect on the tech industry. Discussing the USMCA’s new chapters on digital trade and e-commerce which will have significant implications for emerging technology, Holland cited Mexico and Canada as the two largest export destinations for US tech products with exports to these countries directly supporting a quarter million American jobs. She emphasized that the USMCA is “taking digital trade to the next level and really capturing all the changes that have occurred in the technology landscape since NAFTA was negotiated.” Further, Chapter 19 contains strong provisions around digital trade which “go further than the US has negotiated in the past”. These include the guarantee of cross-border transfer of data, including that of personal information as well as the prevention of forced localization of data storage in-country.

The panel also examined potential areas of concern for the represented sectors. Cassella noted an increase in cost for US auto consumers may be a consequence that is imminent, a result due in part to steel and aluminum tariffs. Zieba furthered that a concern in reference to the pork sector where US producers have faced retaliatory tariffs on pork and pork product exports to Mexico since July. “If that continues on for a while, then we won’t be able to really see the benefits of the USCMA. It’s going to negate those gains and we really cannot compete when we have to pay a 20 percent tax on our exports” Zieba affirmed.

Marczak shifted the discussion to the road ahead for USMCA with the political changes in Washington and a divided Congress. Cassella outlined the long process of ratification and expected back-and-forth between House Democrats, House Republicans and the Administration. Additionally, the International Trade Commission has 105 days to complete its report on the economic impacts of the deal which leaves the timeline in the middle of March. As a reminder that there is quite a long way to go before the USMCA might take effect, Cassella recalled that in 2008 then speaker of the house Nancy Pelosi voted against fast-tracking the US-Colombia Free Trade Agreement which eventually passed three years later in 2011 and took effect in 2012. McKinney noted his optimism that during negotiations of the USMCA that the Trump administration had sufficient communication with Congress for them to find it acceptable once it gets to the floor. Zieba indicated that the number one priority for her constituents is to get the deal passed as soon as possible. Holland mentioned government procurement as one concern from CompTIA’s association which does not provide for any new market access opportunities, maintains the same levels for Mexico as seen an NAFTA and actually eliminates it completely for Canada.

Finally, Marczak raised that one of the issues which can potentially prevent an expedited process in Congress is labor. “In NAFTA, the labor standards were not part of the formal agreement and they were instead included in a side deal” he explained. Cassella affirmed that indeed the biggest two issues surround labor in that House Democrats have indicated that they want stronger, more enforceable labor standards while Republican lawmakers have spoken out against the USMCA’s Article 23 provisions to protect labor rights and discrimination on the basis of sex. She further noted that Canada likely will not be flexible in retracting Article 23.

Looking ahead, panel members agreed that if passed, the USMCA would serve as an effective template for future trade negotiations and treaties.

You can find a video recording of the event here.