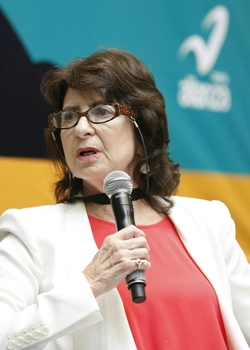 On Thursday, July 27th, the Atlantic Council’s Adrienne Arsht Latin America Center presented preliminary findings to the Mexican Congress of a new three-country report – What if NAFTA Ended? The Imperative of getting negotiations right. The event highlighted the strategic and economic importance of NAFTA to the North American economy right before negotiations between the United States, Canada, and Mexico begin. The final report is set to be released in Washington, DC, in October 2017.

The half day event in Mexico City was kicked off by Congressman Ángel Garcia Yanez, representative of the Nueva Alianza party who gave welcoming remarks. Garcia introduced Jason Marczak, Director of the Adrienne Arsht Latin America Center at the Atlantic Council, who commented on the long-term collaborative relationship that has produced a freer trilateral marketplace and a more competitive North America.

Following Jason’s remarks, Oscar Cázares, President, Mexican National Auto Part Industry, took the stage and provided insights from the auto industry standpoint, one of the sectors that would be most impacted by NAFTA negotiations.

The event continued with a panel featuring the authors of the report -, From Mexico, author Javier Mancera, director and founding partner of consulting firm CMM; from the United States, Philip Levy, senior fellow at The Chicago Council on Global Affairs; and from Canada, Daniel Schwanen, vice president of research at the independent organization CD Howe Institute. They discussed implications of the upcoming negotiations from their country specific perspective under the moderation of Valeria Moy, Director, México, ¿Cómo vamos?, a research group that evaluates the performance of the country to promote accelerated and sustained economic growth.

Daniel Schwanen highlighted that over 2 million Canadian jobs – out of a total of 18 million -depend on trade with the United States. “For the first time, the stock of Canadian direct investment in the United States exceeds the stock of US direct investments in Canada, as US investors looked mostly to other countries for growth. Canadian imports from Mexico, as well as Canadian investments in Mexico, have also grown remarkably under NAFTA, albeit from a low base”, he said.

Javier Mancera explained that if the United States leaves NAFTA, trade between the it and Mexico would be governed by the WTO’s most favored nation (MFN) rules (…), which could be detrimental to the partners of the trade agreement. “Both countries would suffer a negative impact due to the withdrawal, but, WTO rules for bilateral trade would have a more negative consequence on US exports than on Mexico’s due to higher MFN tariffs. The overall impact on total trade deficit might be even more negative for the United States as it might end up increasing this deficit, particularly with respect to Asian economies.”

Philip Levy offered his perspective from a geopolitical standpoint. “NAFTA has contributed significantly to US national security. It has tightened the relationship with both Mexico and Canada and fostered an atmosphere of cooperation that extends well beyond economic matters. National security is also enhanced by regional prosperity, which has been an important result of NAFTA.”

The keynote closing conversation that followed was moderated by Jason Marczak and featured The Honorable Paula Stern, PhD. Chairwoman and Founder, The Stern Group, Inc., and Former Chairwoman of the International Trade Commission. She spoke about what each country was looking to gain and how this agreement can serve as a blueprint for future ones. Paula emphasized the opportunities that lay ahead for greater cooperation in the energy sector and modernization of the agreement to 21st century economic realities especially in regards to intellectual property and e-commerce. “NAFTA negotiators need to focus on improving North America’s energy integration and the region’s global competitiveness. A successful trilateral deal can be the template for future trade agreements including the inclusion of energy which has never been subject to WTO rules,” she said.