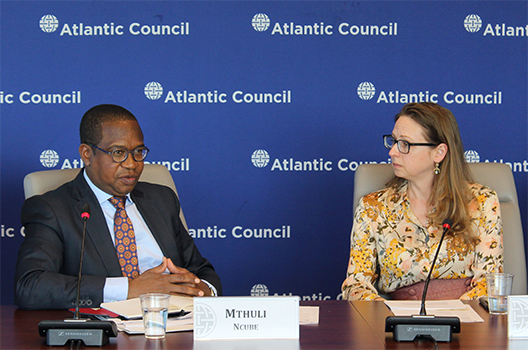 On Monday, March 4, the Atlantic Council’s Africa Center hosted a discussion with H.E. Dr. Mthuli Ncube, minister of finance and economic development of the Republic of Zimbabwe.

Focusing on Zimbabwe’s short-term stabilization plan, Ncube presented the progress made on key economic reforms since he was appointed to the finance ministry by President Emmerson Mnangagwa in September 2018. In particular, he highlighted efforts to impose fiscal discipline on the government, which he claimed has reversed a budget deficit that reached 11 percent in 2018. He also discussed monetary sector reforms, including the recent managed float of the Zimbabwean bond note, which was previously pegged one-to-one with the US dollar. Ncube asserted that although inflation would rise in the short term, this measure would ultimately reduce it by November and thus provide relief for Zimbabweans affected by high prices for basic goods.

Ncube also outlined President Mnangagwa’s vision for political reforms in Zimbabwe, including the repeal of controversial legislation such as the Access to Information and Protection of Privacy Act, which restricts the freedom of the press. Ncube also discussed efforts to streamline regulations for foreign investment; the ongoing negotiations to compensate farmers for land seized under the 2000 Fast-Track Land Reform Program; and his hope that Mnangagwa’s ambitious reform agenda could lead to the repeal of ZIDERA legislation by the US Congress, which has restricted Zimbabwe’s access to international credit.

A discussion, moderated by Ms. Bronwyn Bruton, director of programs and studies and deputy director of the Atlantic Council’s Africa Center, followed Ncube’s remarks. Participants focused on the negative effects of recent reforms on average Zimbabweans, potential new areas for investment in Zimbabwe, and the government’s efforts to clear its arrears with international finance institutions such as the World Bank and International Monetary Fund.

Those in attendance and participating in the discussion included LTG William Ward, USA (Ret.), former commander of US Africa Command; Amb. John Campbell, former US Ambassador to Nigeria; and a number of US and non-US government officials and business leaders.