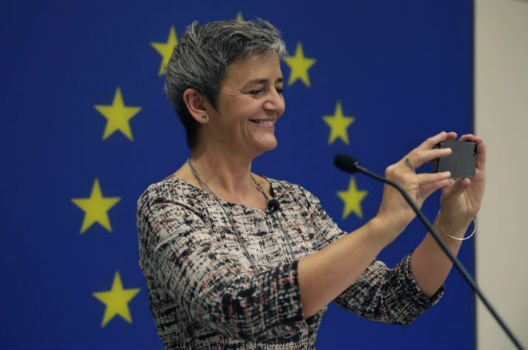 Vestager on US visit

US orders Deutsche Bank to pay billions, bank to fight back

The US Department of Justice is seeking USD 14 billion from Deutsche Bank, following investigations into possible misrepresentation of the quality of mortgage-backed securities in the lead-up to the 2008 financial crisis. Germany’s largest bank will reportedly challenge the claim, which some view as US retaliation for the recent EU Commission ruling against Apple’s tax practices in Ireland. The bank is one of the biggest foreign contributors to US housing loans, increasing the risk of a negative impact on the US commercial real estate industry.

EU Competition Commissioner Margrethe Vestager had tense meetings with US Treasury Secretary Jack Lew and other top US tax and trade authorities this week in her first appearance stateside since the divisive Apple/Ireland state aid ruling. Both parties reportedly reaffirmed their disagreement on the case and on similar EU antitrust investigations. In meetings with Lew and other officials who have spoken out against the EU executive’s decision to force Apple to pay EUR 13 billion in back taxes to Ireland, Vestager defended her position by pointing to a new Commission investigation into French power company Engie to counter the claim that the EU has an anti-US bias. Vestager also hinted that more cases against other US tech giants, such as Google, Facebook, and Microsoft, may be forthcoming.

Read More:
Politico: For Margrethe Vestager, timing is of the essence
Wall Street Journal: Europe’s bite out of Apple shows the need for US tax reform


CETA gets vote of support in Germany, but public opinion lags

Germany’s center-left Social Democratic Party (SPD) expressed support for CETA, the EU-Canada trade deal, on September 19. The party’s decision is a boost for the beleaguered trade deal, which is expected to be signed by both parties in October 2016. Trade Commissioner Cecilia Malmstrom also supported the bill in her opening speech at the EU Trade Ministers meeting in Bratislava. However, popular support for CETA as well as its US counterpart TTIP is declining, with protests taking place in Brussels and throughout Germany this past week.

The Irish Times: Protests in Brussels as talks on EU-US trade deal falter
BBC: Protests in Germany against transatlantic TTIP and CETA trade deals
Politico: EU trade policy back on the rails after crunch German vote