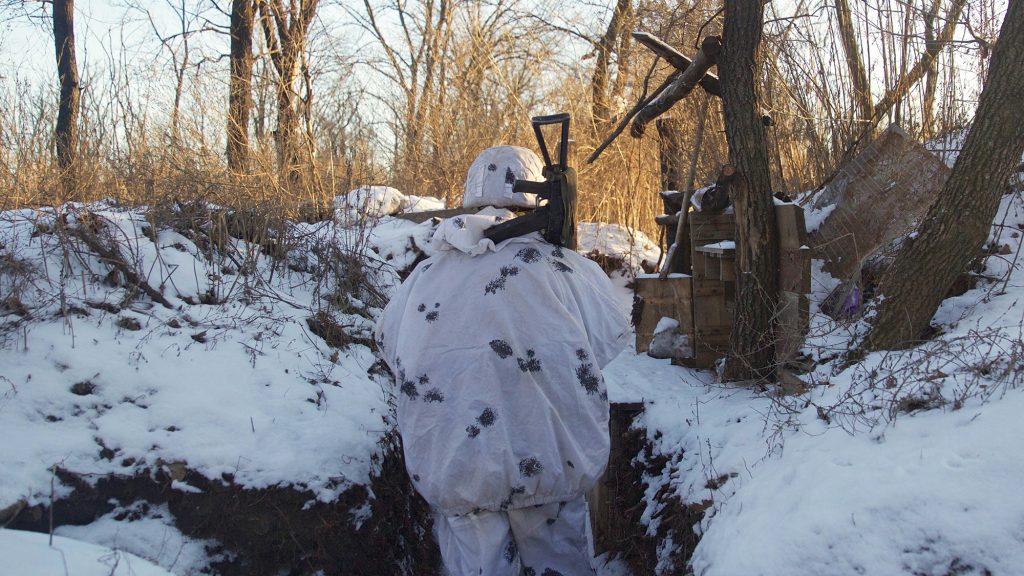 This is what happens when a well-meaning incrementalist locks horns with a brutal opportunist: The opportunist seizes the opportunity.

This is what happens when one of the most traditional politicians in the United States faces a historic confrontation with the world’s wiliest authoritarian, for whom the ends justify any means: The authoritarian takes the initiative.

This is what happens when US President Joe Biden, battered by America’s messy democracy after a long year in office, comes up against Russian President Vladimir Putin, who looks more determined than ever in the third decade of his authoritarian reign.

Unless Biden can turn the ongoing crisis over Ukraine into an opportunity—by rallying allies and managing internal divisions the way former US President Harry Truman did at another such inflection point—the setback for Europe and the world could be generational.

Unless, like Truman, Biden can shift the tide such that the United States and its allies retake the initiative, Putin (with China’s moral and material support) will continue his long campaign to reverse the most significant outcome of the Cold War: the changed principles under which countries in the world navigate the future together.

“Those principles,” said US Secretary of State Antony Blinken in Berlin on Thursday, “established in the wake of two world wars and a cold war, reject the right of one country to change the borders of another by force; to dictate to another the policies it pursues or the choices it makes, including with whom to associate; or to exert a sphere of influence that would subjugate sovereign neighbors to its will.”

Blinken’s words are powerful and worth repeating here because they were too easily lost in last week’s cacophony of news: “To allow Russia to violate those principles with impunity would drag us all back to a much more dangerous and unstable time, when this continent and this city were divided in two, separated by no man’s lands, patrolled by soldiers, with the threat of all-out war hanging over everyone’s heads. It would also send a message to others around the world that these principles are expendable, and that, too, would have catastrophic results.”

Some would argue that the United States is in no position to spearhead such an epochal defense of post-Cold War principles, with its own democracy so divided and disheartened, and with its president’s popularity sinking ahead of pivotal mid-term elections.

Yet that’s even more reason to look to Truman, who assumed the presidency in April 1945 at the tail end of World War II. His Democratic Party was viciously divided between big-city progressives and southern conservatives.

He nevertheless advocated for what today would pass as far-left initiatives, expanding the welfare state and stepping up government intervention in the economy, despite an electorate that was leaning conservative.

If this all sounds familiar, it’s also worth remembering ahead of this year’s elections that Truman’s Democratic Party in 1946—the first election after World War II—lost fifty-four seats in the House of Representatives and eleven in the Senate, allowing Republicans to take control of both chambers for the first time since 1931.

This happened even though Republicans were navigating their own familiar-sounding disputes between right and moderate wings, particularly regarding foreign policy as the nation struggled to find its identity after the war. The conservative isolationist old guard, led by Ohio Senator Robert Taft, was jockeying for influence against the internationalist wing, with members like Massachusetts Senator Henry Cabot Lodge Jr.

The partisan bickering never ended. Truman left office in January 1953, having hit a historically low approval rating the previous year of 22 percent due to a prolonged Korean War, an economic slowdown, labor unrest, and government corruption.

Yet he’s now considered one of the greatest US presidents because of his response to the Soviet challenge—which included the Marshall Plan, the Berlin Airlift, and the creation of NATO. His political, diplomatic, military, and economic initiatives set the stage for an internationalist foreign policy that laid the groundwork for the Cold War’s end and Soviet collapse.

Biden should keep all this in mind as a litany of pundits counsel him to course correct now to avoid administration failure.

One administration official recently listed three cardinal errors that need to be addressed immediately: the poor management of the continued COVID-19 challenge, the failure to appreciate the politics that has plagued Biden’s Build Back Better legislation, and, most importantly for Biden’s electoral hopes, the underestimation of inflationary risk.

Yet even if Biden does course correct to address all those domestic challenges, that could be the easy part. It was Truman’s handling of international affairs that won his place in history and shaped the post-war era. The stakes are just as high for Biden, who has been right to see this period as such an “inflection point.”

Biden triggered an uproar during his news conference Wednesday when he appeared to suggest that allies would be divided over what to do about a “minor incursion” by Russia into Ukraine.

Though US officials later walked back his statement to settle Ukrainian leaders and domestic critics, the Washington Post editorial board was right to opine that the president “was telling the truth.”

As I previously argued on January 9, for all the Russian buildup of military and hybrid-warfare capabilities, Putin’s actions are likely to be craftier and messier than many expect, designed to divide NATO allies and the United States on how best to respond.

In meeting with Russian Foreign Minister Sergei Lavrov on Friday, Blinken appears to have bought some time for more talks with the Russians. Or perhaps, as an analysis by the Atlantic Council’s military fellows points out, it could just as easily provide sufficient time to complete military preparations for an incursion.

In the end, the problem isn’t the nature of Putin’s next move but rather the troubling trajectory behind it, one that has included Russia’s 2008 invasion of Georgia, its 2014 annexation of Crimea, and now this test of Biden.

As Truman said in 1952, addressing a politically fractured country and rallying against isolationist forces, “world leadership in these perilous times calls for policies which, while springing from self-interest, transcend it—policies which serve as a bridge between our own national objectives and the needs and aspirations of other free people.”

History hinges on whether Biden answers this call.

#1 The Stakes of Russian Aggression for Ukraine and Beyond
US Secretary of State Antony J. Blinken

Inflection Points rarely includes speeches by government officials in the top weekly reads. But this week’s address by Blinken in Berlin is worth reading in its entirety.

As I wrote above, Blinken refers to the principles Putin is challenging, principles that “reject the right of one country to change the borders of another by force; to dictate to another the policies it pursues or the choices it makes, including with whom to associate; or to exert a sphere of influence that would subjugate sovereign neighbors to its will.”

Said Blinken about Russia’s threats to Ukraine, “It’s bigger than a conflict between two countries. It’s bigger than Russia and NATO. It’s a crisis with global consequences, and it requires global attention and action.”

Kudos to our colleagues at the Atlantik-Brücke, German Marshall Fund, Aspen Institute Germany, and American Council on Germany for hosting the speech. Read more →

This week’s must-read is a carefully reported look at Putin’s past and present that explains how his high risk tolerance and growing boldness have led to his latest aggressive moves around Ukraine.

Now Putin, whose long-term strategy has been characterized by a series of opportunistic gambles, sees the biggest prize yet: “the possibility of driving a wedge between the US and European allies,” reads the article in paraphrasing Fiona Hill, who served as the top Russia expert on then President Donald Trump’s National Security Council.

Read this to understand how Putin ticks—and why he is acting now. Read more →

To get a further perspective on the foreign-policy troubles Biden is grappling with, read this smart, significant analysis by Hal Brands on the plethora of threats the United States faces at a moment of retrenchment.

Reflecting on the recent history of US defense planning, Brands writes: “The 2018 defense strategy was also an acknowledgment of overstretch: the United States could focus on its primary challenge,” China, “only by reducing its ability to focus on others. This limitation is the root of the problem Biden has inherited, and it has some dangerous implications.”

As a result, US adversaries are growing bolder across all fronts. And as Brands notes, “The reality is that explicit coordination is hardly necessary to profit from US overextension.” Read more →

#4 Momentum is building for war in Ukraine
The Economist

“A grim momentum is building,” the Economist writes in this important analysis of the Russian build-up against Ukraine. Yet, the magazine argues, the lack of a propaganda blitz like the one that preceded the Russian invasion of Crimea, “suggests, perhaps, that [Putin] has yet to make up his mind.”

The Economist warns that the potential costs for Russia are high. “A quixotic quest to restore the Russian empire will not revive it, especially if lots of Russians are killed,” it says. “Even autocrats have to worry about the public turning against them. (Not to mention the elite, whose lives could be made uncomfortable by more sanctions.) A war that goes wrong could cost Mr. Putin his grip on power—and all that goes with it. It would be a reckless gamble.”

With all this in mind, perhaps there is still time to avert conflict, but the hourglass is draining fast. Read more →

Amid a flurry of diplomatic talks, fiery rhetoric, and movements of heavy materiel, we are lucky at the Atlantic Council to have a team of military fellows who can help us separate the signal from the noise.

This is a must-read analysis by active-duty officers with the US Army, Navy, Air Force, and Marine Corps, who share what indicators we should all be monitoring to divine Putin’s intentions.

For example, watch the waters around Odesa, pay attention to cyberattacks and military exercises, keep your eyes on Russia’s reserves, and look out for sub-zero temperatures and medical preparations. Read more →

By the Digital Forensic Research Lab

International sanctions imposed on Russia since 2014 in response to Moscow’s attack on Ukraine continue to have a negative impact on the country’s economy despite Kremlin efforts to claim otherwise.

Image: A service member of the Ukrainian armed forces stands guard at combat positions near the line of separation from Russian-backed rebels near Horlivka in the Donetsk region on January 20, 2022. Photo via REUTERS/Anna Kudriavtseva.