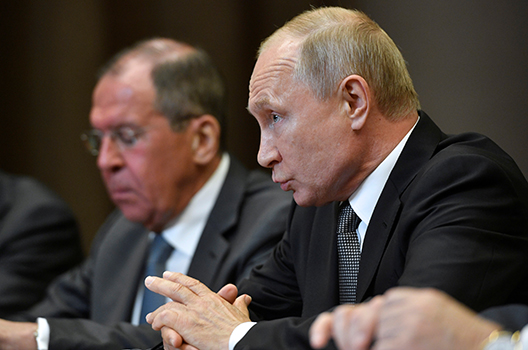 Russian leader Vladimir Putin recently bought himself into an African country for a relative pittance, working through Yevgeny Prigozhin, his favorite contractor for such special projects, which have ranged from tipping US elections to saving Syria’s dictator.

With that partner, he won an insider’s influence over the strategically placed Central African Republic (CAR) and priority access to its oil, diamonds, gold and uranium resources. At least that’s how one US government official, with years of experience tracking such matters, explains this bargain basement price of geopolitical cunning.

The story goes that President Faustin-Archange Touadera, though elected fairly in 2016, was struggling to exert control over much of the nation’s territory. Soldiers from a United Nations peacekeeping mission were working to stabilize the country amid clashes between rival militias, but inadequately.

Welcome to our new era of major power competition, which is playing out globally, sometimes quietly and sometimes this colorfully. What the CAR story provides is yet further evidence that America’s autocratic rivals, both Russia and China, are acting with greater operational creativity and strategic purpose than their counterparts – in this case France and the United States.

In the Central African Republic, Washington had discarded this resource-rich country, poised strategically between Africa’s Muslim north and Christian south, as a place of marginal importance. US officials are now scrambling to frame a response.

Ensuring his escalating African efforts aren’t missed, Putin and Egyptian President Abdel Fatah al-Sisi will convene 50 African leaders at the first-ever Russian-African Summit in Sochi this October. Russian Foreign Minister Sergei Lavrov, a frequent traveler to Africa, says its purpose will be to cement “Russia’s active presence in the region.”

When Moscow sees a vacuum in Africa left by Europe or the United States, it increasingly steps in with trade and business agreements, military sales and cooperation, and political and paramilitary support. What it lacks in China’s means it makes up for with muscle. Putin’s efforts sometimes fail: Russia bet on the wrong horse in Sudan and paid handsomely for a nuclear energy contract in South Africa that looks less likely now that Jacob Zuma has left power.

Russia’s successes, however, are more frequent. And both Russia and China see themselves involved in a long game for position and influence on an African continent that by 2050 will have 25% of the world’s working age population and the greatest store of rare earth materials outside of China. What’s more, its 54 countries make up the most important voting bloc in the United Nations, providing both China and Russia the wherewithal to block Western initiatives.

Though the story of China’s increased influence in Africa is well-known, the competing Russian version has only recently gained more attention.

The Guardian this week, reporting from documents leaked to the Mikhail Khodorkovsky funded Dossier Center, reports that Russia is seeking to bolster its presence in at least 13 African countries – having already signed military deals in 20 states – “by building relations with existing rulers, striking military deals, and grooming a new generation of ‘leaders’ and undercover ‘agents.’”

The documents include a map that assesses the level of cooperation between Prigozhin’s “company” and individual African countries, scoring them at between one to five points on matters of cooperation that include military, political, economic, police training, media and humanitarian projects.

This Russian activity hasn’t gone without notice in Washington. Last December, National Security Advisor John Bolton, in a speech to the Heritage Foundation, laid out what he called “the Trump administration’s new Africa strategy.”

The United States, however, is playing catch-up and lacks not only the bandwidth but also the focus. It also hasn’t yet fully absorbed the requirements of this new, global struggle for influence, one where the costs of losing may not be apparent until it’s become a fait accompli.

One of the earliest experts to spot this Russian shift of attention to Africa was J. Peter Pham, director of the Atlantic Council’s Africa Center. Pham isn’t ready to predict a return to the Cold War’s zero-sum competition in Africa, but he does believe the United States and Europe “no longer can ignore Moscow’s resurgent interest” and its reconstituting of a strategic web of access.

One of the most telling recent efforts, reported in a BBC documentary earlier this year, involved a Russian campaign to influence presidential elections in Madagascar. According to the BBC, the Russians worked with six of the 35 presidential candidates. Candidates who received Russian money told the BBC they were instructed to back off and support the front-runner, who Russia was also backing, when it became apparent he would win.

Yet tracking these sorts of Russian activities in Africa can be a perilous game. Last July, three Russian journalists investigating Prigozhin’s paramilitary involvement in CAR were shot dead outside the capital city.

Russia’s price for acquiring influence in the Central African Republic might have been a small one. The price for the United States and Africans alike of neglecting this Russian shift may be far higher.