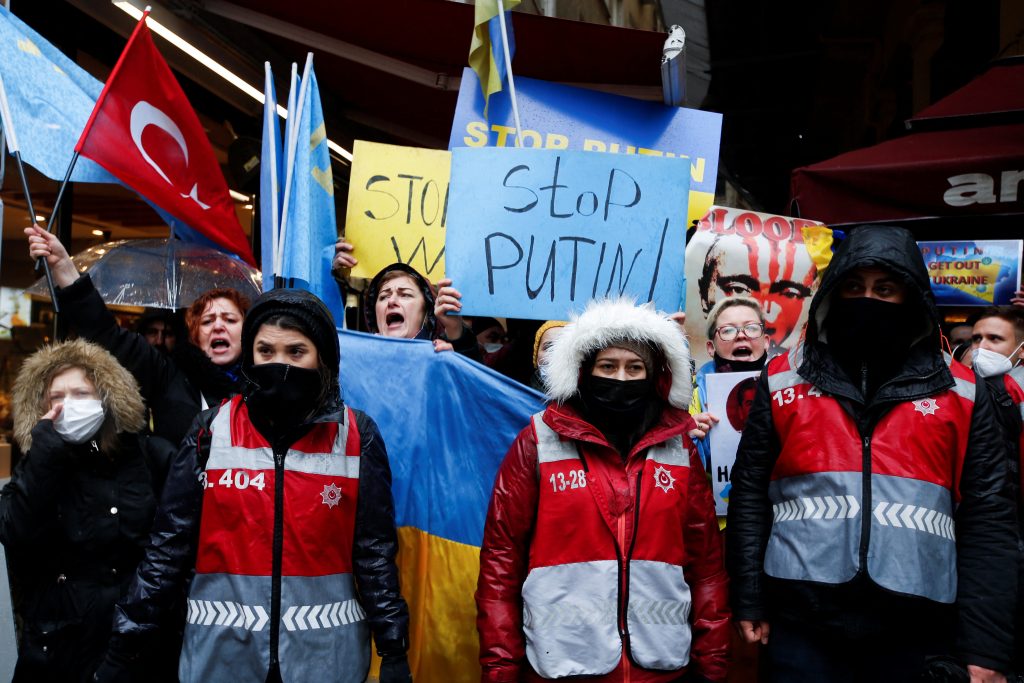 President Erdoğan has described the Russian military operation against Ukraine as a serious blow to regional security and as an unacceptable act, as he presided a security summit to assess the ongoing developments following the start of Russia’s invasion of Ukraine. “We want the problems between these two countries, with whom we have very good relations, should be resolved in the context of the Minsk agreements. I also said this to Mr. [Russian President Vladimir] Putin last night,” he recalled. Erdoğan and Putin had a phone conversation late Feb. 23 to discuss the situation.

Hours after Russia launched attacks on Ukraine on Thursday, Kyiv requested Turkey to close the Bosphorus and Dardanelles straits to Russian ships. Under the 1936 Montreux Convention, Turkey has control over the passage of vessels between the Mediterranean and the Black Sea, making it an essential player in the current conflict between Ukraine and Russia. In addition to control of the straits, the convention gives Turkey power to regulate the transit of naval warships, including closing the straits to all foreign warships during wartime.

Turkey cannot stop Russian warships accessing the Black Sea via its straits, as Ukraine has requested, due to a clause in an international pact that allows vessels to return to their home base, the Turkish foreign minister said on Friday. Ukraine has appealed to Turkey to block Russian warships from passing through the Dardanelles and Bosphorus straits which lead to the Black Sea, after Moscow on Thursday launched a full-blown assault on Ukraine from land, air and sea.

Nikkei Asia: Turkey does not recognize Russian moves on Ukraine: Erdogan to Putin

President Tayyip Erdogan told his Russian counterpart Vladimir Putin on Wednesday, February 23, shortly before the conflict began in earnest, that Turkey did not recognize steps against Ukraine’s territorial integrity, his office said, after Russia recognized two breakaway regions in eastern Ukraine. In the call, Erdogan told Putin that military conflict in the region would not benefit anyone and repeated his offer to help solve the crisis, his office said in a statement, adding Erdogan said he valued Putin’s close cooperation on regional issues and wanted to continue this.

When Russian President Vladimir Putin announced his decision to recognize two breakaway regions in east Ukraine as independent, NATO member and Black Sea neighbor Turkey swiftly criticized the move, but stopped short of announcing any punitive measures. Turkey is in a unique bind: it has good ties with both Ukraine and Russia, but also opposes sanctions in principle, just as the West is poised to slap them on Moscow as long promised. “Sanctions against Russia are useless. You only postpone the problems,” Turkish Presidential Spokesman Ibrahim Kalin told Die Welt at the weekend, adding “new rules and principles” were needed for both Russia and the West to “feel safe”.