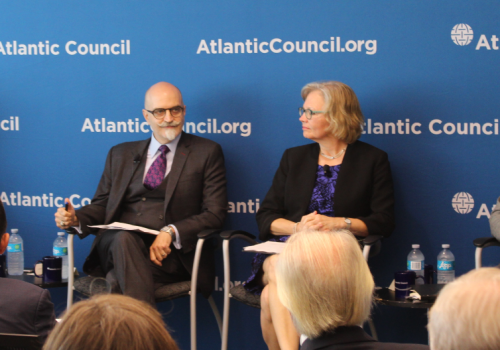 On October 10, 2018, the Atlantic Council’s Cyber Statecraft Initiative convened key stakeholders from the financial, governmental and academic communities to convene for the release of a joint report by the Brookings Institution and Columbia University’s School of International and Public Affairs, The Future of Financial Stability and Cyber Risk.

Healey Quoted in Fifth Domain on Cybersecurity and North Korea

In the News by Jason Healey

Healey in the Cipher Brief: RIP Cyber Coordinator: An Obituary

In the News by Jason Healey

Jason Healey is a nonresident senior fellow for the Cyber Statecraft Initiative of the Atlantic Council and senior research scholar at Columbia University’s School of International and Public Affairs, focusing on international cooperation, competition, and conflict in cyberspace.

From 2011 to 2015, he worked as the director of the Council’s Cyber Statecraft Initiative. Under his leadership, the Initiative made its mission “Saving Cyberspace” to help create a more sustainable Internet that remains as open and free for future generations as it was for its pioneers. He guided the Initiative’s work with Fortune 500 companies, governments, and other stakeholders to examine the overlap of national security, international relations, and economic security issues and to promote thought leadership in cyber statecraft.Mr. Healey is also the editor of the first-ever history of cyber conflict, A Fierce Domain: Conflict in Cyberspace, 1986 to 2012 and coauthor of the book Cyber Security Policy Guidebook by Wiley. Additionally, his ideas on cyber topics have been widely published in over a hundred articles and essays published by the Atlantic Council; the National Research Council; academic journals such as those from Brown and Georgetown Universities; along with the Aspen Strategy Group and other think tanks.

Mr. Healey is also the president of the Cyber Conflict Studies Association. Mr. Healey has unique experience working issues of cyber conflict and security spanning fifteen years across the public and private sectors. As director for Cyber Infrastructure Protection at the White House from 2003 to 2005, he helped advise the President and coordinated US efforts to secure US cyberspace and critical infrastructure. He has worked twice for Goldman Sachs, first to anchor their team for responding to cyberattacks and later as an executive director in Hong Kong to manage Asia-wide business continuity and create the bank’s regional crisis management capabilities to respond to earthquakes, tsunamis, or terrorist attacks. Immediately after the 9/11 attacks, his efforts as vice chairman of the Financial Services Information Sharing and Analysis Center created bonds between the finance sector and government that remain strong today.Starting his career in the United States Air Force, Mr. Healey earned two Meritorious Service Medals for his early work in cyber operations at Headquarters Air Force at the Pentagon and as a plankholder (founding member) of the Joint Task Force – Computer Network Defense, the world’s first joint cyber warfighting unit. He has degrees from the United States Air Force Academy (political science), Johns Hopkins University (liberal arts), and James Madison University (information security).