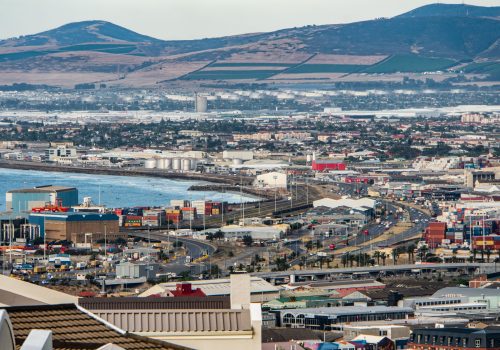 One of the biggest obstacles to wealth creation and greater economic prosperity in Africa has to do with land ownership. Overcoming this obstacle will require better data collection, aggregation, and transparency.

Tom Koch is a nonresident fellow at the Atlantic Council’s Africa Center and director of global capital and strategy at FCA Corp, the advisor to an Africa-focused private equity fund. In his role at FCA Corp, he is responsible for strategy formulation, risk assessment, the end-to-end investment process, and portfolio company growth across the firm’s African investment portfolio, which includes investments in the energy, financial-services, real-estate, and hospitality sectors. Previously, he worked within Deloitte Consulting’s mergers and acquisitions group focusing on transactions and projects in the industrial, hospitality, and education spaces.

Koch’s last active-duty assignment was working as the Marine Corps Representative to the US Department of Defense Business Board in the Pentagon, where he teamed up with business executives to provide strategic advice to senior defense leaders. Prior to that, he worked in the Marine Corps Office of Legislative Affairs, where he helped shape policy between the Marine Corps and the US Congress and accompanied members of Congress on high-level bi-lateral engagements overseas. Koch began his time in Washington, DC, as a Department of Defense legislative fellow in the personal office of a senior member of Congress where he gave advice on various national-security and foreign-policy issues. Koch began his time in the Marines with two deployments to Helmand Province, Afghanistan: one as a detachment commander and the other as a company commander.

Koch earned an MBA in finance with honors from the University of Pennsylvania’s Wharton School and a bachelor’s degree from the US Naval Academy. Koch is a Marshall Memorial fellow with the German Marshall Fund, a past Presidential Management fellow finalist, and a member of the Atlantic Council’s GeoTech Center Action Council.