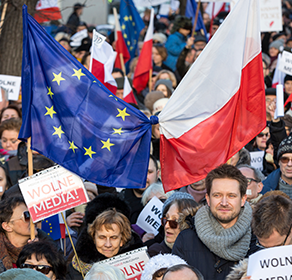 Throughout much of the 1990s, progress was the order of the day. NATO enlargement under the Clinton administration was part of a broader global strategy, presenting democratic and entrepreneurial opportunity. This process was coupled with the prospect of new cooperation with Russia to create an undivided, free, and prosperous Europe. A decade and a half later, Central Europe faces severe challenges and signs of particular vulnerability to backlash against the very ideals this period set out to establish and the values expected to endure.

The authors, Senior Fellow Jeffrey Gedmin and Deputy Director Simona Lightfoot of the Atlantic Council’s Future Europe Initiative, outline four factors that have ushered in the present situation in Central Europe. First, many believed that Central Europe would quickly and easily graduate from the “school of democracy”, but the damaged incurred by forty years of communist rule and pernicious legacy of totalitarianism proved more difficult to overcome. Second, the United States overestimated its influence in assisting the region’s transition, and certainly underestimated the effect of its subsequent disengagement. Third, Russia returned with a vengeance, employing increasingly aggressive and hostile foreign policies to US and Western interests. Fourth, the European Union is in trouble, and not just because of Brexit. In some intellectual circles in Central and Eastern Europe, a new moral relativism is on the rise and may soon become part of what drives the forces of disunity today across Central and Eastern Europe.

A confluence of events and decisions involving American leadership over the past decade has weakened the US role in Europe and its perception by transatlantic partners abroad. However, it would run counter to US interests to divorce itself from helping to reinforce a strong Europe. The authors outline three recommendations for the United States to respond to the rise of populism and decline of democracy on both sides of the Atlantic. First, the United States should share practices and capabilities to help create an “innovation hub” in the region and support local start-ups and entrepreneurs. Second, the United States should emphasize the accomplishments and gains brought by democratic freedoms to advance a strong transatlantic narrative, especially among the next generation. Third, the United States should set an example of burden-sharing and moral leadership by taking in more refugees itself and helping to reverse the populist, isolationist agenda.

This policy paper is part of a broader Atlantic Council effort to explore transatlantic policy recommendations to bolster effective cooperation between the United States and key countries and regions that have been historical drivers of European unity, peace, and prosperity. These relationships are critical to ensure a strong, stable, and competitive Europe allied to an engaged United States.