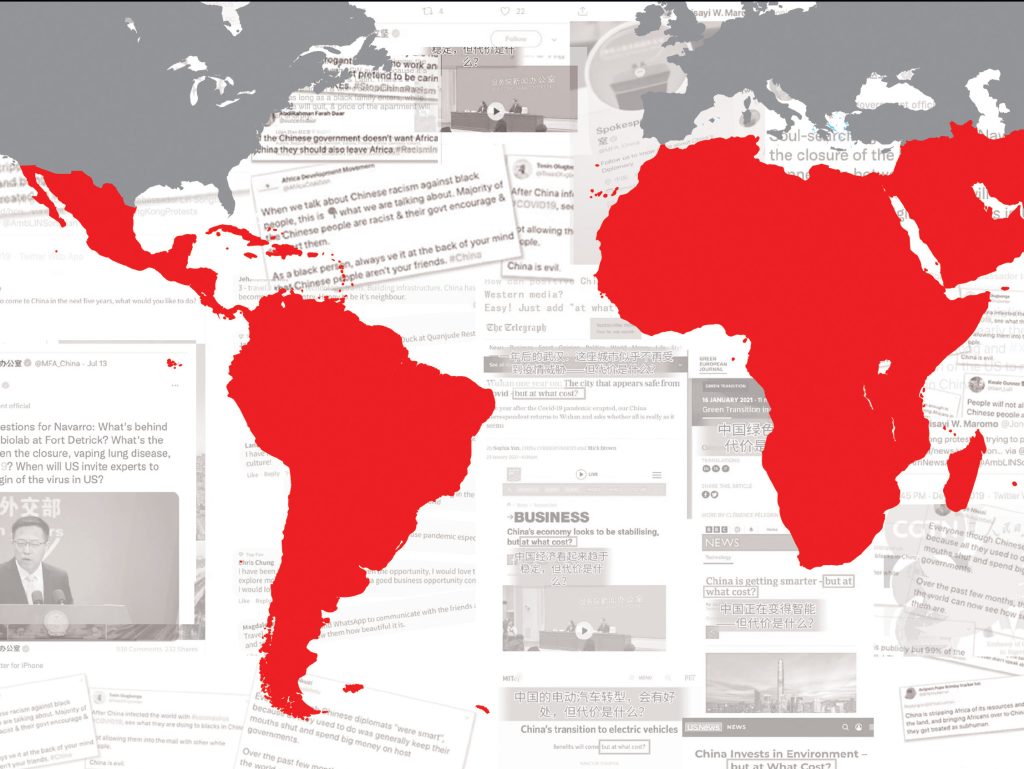 An overview of Chinese activities in Sub-Saharan Africa, Latin America, and the Middle East

As China’s military and economic power has grown, so too has its investment in propaganda and influence operations. Following Xi Jinping’s rise to power and China’s adoption of a more confrontational foreign policy, the country saw a need to sway global public opinion in its favor. Beijing refers to this as “discourse power,” a strategy to increase China’s standing on the world stage by promoting pro-China narratives while criticizing geopolitical rivals. The end goal is to shape a world that is more amenable to China’s expressions, and expansion, of power.

China sees the Global South as an important vector for enhancing discourse power and has deployed a number of tactics to disseminate Chinese Communist Party (CCP)-approved narratives there. Two pillars of its strategy include “using international friends for international propaganda” (通过国际友人开展国际传播) and “borrowing a boat out to sea (借船出海).” The first pillar relies on co-opting the voices of foreigners (and foreign leaders) to spread pro-China messaging. The second pillar relies on using international platforms to spread Chinese propaganda in target environments. This includes expanding China’s media footprint, conducting propaganda campaigns, and leveraging Beijing’s influence to gain government support for its initiatives in international forums like the United Nations.

The logic behind this strategy is that, as China has begun to take a more active role in global affairs, Beijing has seen the need to address the potential for collective mobilization in response to its behavior. China understands that countries like the United States and the United Kingdom are assessing its expansionism and have already moved to counter its influence. By gaining control of the narrative to depict its expanding role in the world as legitimate, rules-based, and win-win, China is seeking to shift the burden of proof onto Western countries and silence potential critics. Xi outlined this strategy in a May 2021 speech to the Central Committee, emphasizing that China must “expand [its] international communication through international friends,” adding that these “foreign friends” will be the country’s “top soldiers of propaganda against the enemy” as China rises.

To this end, one focus of China’s global discourse power push has been to foster buy-in from leaders in the Global South for Chinese-defined norms. This includes its principles of “non-interference” in other countries’ internal affairs and on a concept of “human rights” that actively subordinates personal and civic freedoms in favor of state-centered economic development. It is meant to stand in opposition to a Western human rights framework that China criticizes as having been used for interventionist ends, for example, in Afghanistan and Iraq.

Beijing also sees control over the media environment as critical for enhancing its discourse power so that it can spread a positive “China story” (讲好中国故事). In doing so, it is better able to promote its image as a responsible power and gain support for China’s model of international relations—one that privileges state sovereignty over universal human rights, government control over public discourse, and authoritarianism over democracy. As Chinese scholars Mi Guanghong and Mi Yang put it, “strengthening the dissemination, influence and creativity of external propaganda is [in the fundamental interests of] the country, with profound practical significance.”

China’s discourse power strategy also involves creating multilateral regional organizations to advance its interests. This includes the Forum on China-Africa Cooperation (FOCAC) in Africa, the Forum of China and the Community of Latin American and Caribbean States (China-CELAC Forum) in Latin America, and the China-Arab States Cooperation Forum (CASCF) in the Middle East. China leverages its position in these forums to gain support for its international initiatives, to deepen its economic and political engagement, and to promote state narratives. For example, one concept central to China’s discourse power strategy is its vision to build a “community with a shared future”—language Chinese officials and diplomats often use in Belt and Road Initiative (BRI)-connected engagements with foreign counterparts to signify China’s pursuit of a multilateral approach to international relations as an alternative to the “unilateral” approach taken by the United States. This strategy is what Chinese scholars call the “subcutaneous injection” theory of communications—winning international “friends” who understand their own local contexts and are able to “tell China’s story” to allow for a more “immediate and quick” dissemination of Chinese discourse priorities in the region.

The regions addressed in this report—Sub-Saharan Africa, Latin America, and the Middle East—are located in the Global South, which is at the forefront of China’s discourse power push. This is for a number of reasons: China sees waning US involvement in these regions as an opportunity for it to win “international friends” as great-power competition increases; emerging economies offer fruitful opportunities to expand the scope and depth of the BRI, a massive predominantly infrastructure initiative; and Beijing wants to convince others of its “peaceful rise” in order to assuage growing concerns over its increasingly visible global presence.

Yet these areas of the world have received less attention in public policy and research spaces than Chinese propaganda efforts in Western countries. In the meantime, the impacts of Chinese discourse power operations in these regions are affecting democratic norms and behaviors by constraining the space for organic civil society discourse and by further entrenching existing autocratic regimes. This report aims to shed light on China’s activities in these regions and to offer an initial assessment of the impacts of its efforts.

The first section of this report will provide an overview of Chinese discourse power operations, including its origins and aims. The second section is comprised of three regional subsections that focus on Sub-Saharan Africa, Latin America, and the Middle East, respectively. Each subsection includes a broad overview of how the region fits into China’s global discourse power strategy and features an associated country case study. The case studies highlight recent Chinese influence campaigns and their effects on domestic political, social, and media environments.

The third and final section of this report synthesizes trends and themes, offering a preliminary assessment of their potential implications and impact.

Image: Graphic map of the global south in which China uses discourse power.