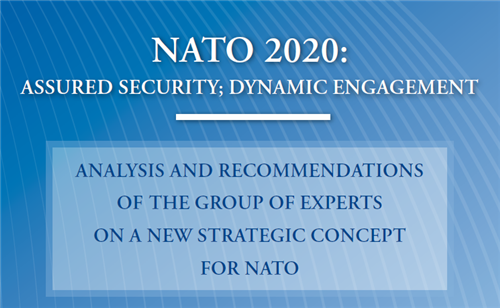 On 17 May, the Group of Experts appointed by Secretary General Anders Fogh Rasmussen to lay the groundwork for a new Strategic Concept for NATO presented its analysis and recommendations to the North Atlantic Council (NAC).

Speaking to the Council, the Secretary General thanked the experts for their hard work. “The group has … reached out beyond NATO to civil society and the strategic community, partners and international organizations, particularly the United Nations, the European Union and the OSCE,” he said.

“When I launched the process leading to NATO’s new Strategic Concept last August, I promised it would be the most open, transparent and inclusive in NATO’s history. The Group of Experts has certainly lived up to that commitment.”

Madeleine Albright spoke about the process, referring to her role as the group’s Chair as well as the role of the Vice Chair filled by Jeroen van der Veer. “Throughout, we both listened to – and reflected – an array of views. The report we present today, however, speaks with one voice.”

Secretary Albright explained the report’s two underlying conclusions: “First, the Alliance has an ongoing duty to guarantee the safety and security of its members. Second, it can achieve that objective only if it engages dynamically with countries and organizations that are outside its boundaries.”

The recommendations call for contingency planning and military exercises so all Allies feel safe, and for the Alliance to become more versatile to face new dangers “from sources that are geographically and technologically diverse”. It should speed up transformation by developing “sustainable, deployable and interoperable military forces”, improve its capacity for rapid response and increase its commitment to common funding.

Importantly, “…partners should play an increasing role in NATO activities,” said Dr Albright. NATO should improve its ability to work with other countries and organizations, in particular the European Union with its overlapping membership.

She also singled out NATO-Russia relations: “It is clearly in NATO’s best interest to work with Moscow to build a cooperative Euro-Atlantic security order and to respond to such shared concerns as terrorism, nuclear proliferation, piracy and drug trafficking.

“Partnership … is a two way street – but from the Alliance perspective, the door to cooperation with Moscow should remain open at all levels.”

While there are limits to NATO’s resources and responsibilities, she said, “NATO is more than just a military alliance; it is also a political community.”

Finally, Dr Albright stressed the need for all of these measures to be accompanied by a commitment to organizational reform as well as more effective efforts to build domestic support for NATO’s mandate.

In his turn addressing the NAC, Mr Van der Veer stressed the importance of maintaning and generating public support for the Alliance. He identified three elements as essential for ensuring such support: “a proven track record, a clear strategy and trust in people leading the organization or its key stakeholders.”