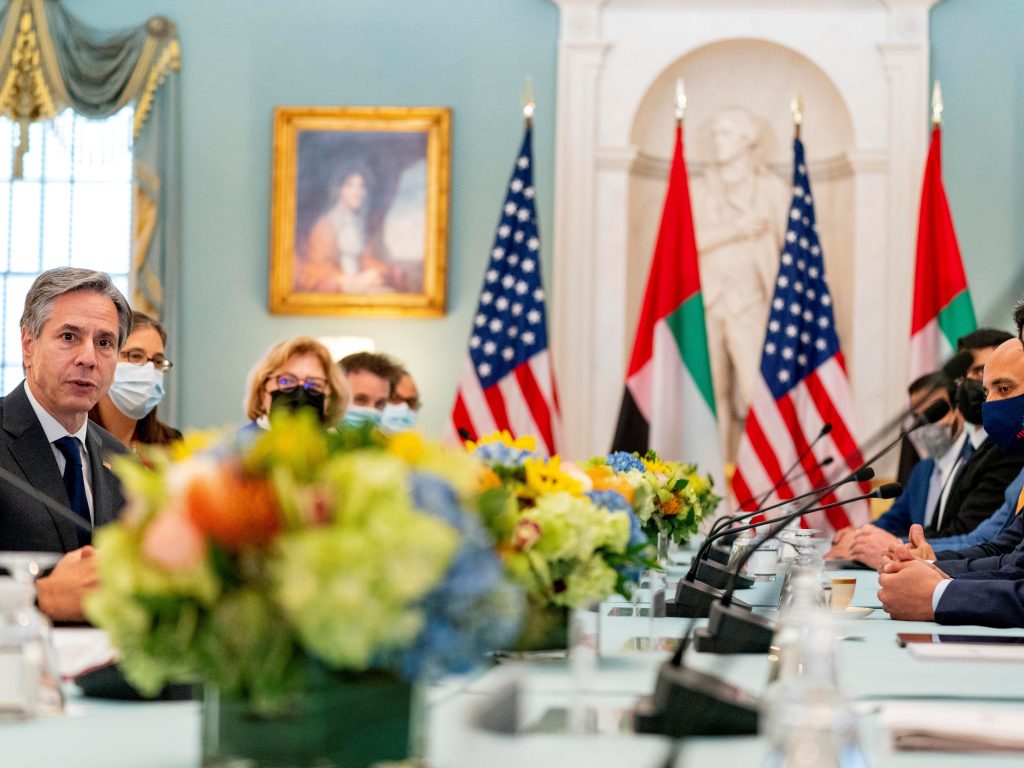 President Joe Biden’s upcoming visit to the Middle East will seek to reassure regional allies at a time when the dominant narrative about the US role in the region, promulgated by Arab capitals, is that the United States is withdrawing from the Middle East and abandoning its allies and security commitments. The litany of evidence Middle East states point to is extensive and bipartisan. It starts with former US president Barack Obama’s “pivot to Asia” and was further evidenced, they claim, by his decision not to enforce his own “red line” regarding Bashar al-Assad’s use of chemical weapons against the Syrian people. The view was reaffirmed by the deeds and words by Obama’s successor, Donald Trump, who, following the September 2019 attack on Saudi Aramco facilities, declined to come to Riyadh’s defense militarily and stated that the United States “no longer needs” Middle Eastern oil. Finally, Abu Dhabi’s perception of the lack of support from US President Joseph R. Biden, Jr., after multiple Houthi missile attacks on the United Arab Emirates—most prominently the January 2022 attack on the Abu Dhabi National Oil Company—caused the US-UAE relationship to reach yet another low point. That attack came less than six months after the US withdrawal from Afghanistan which further raised questions, in the view of Middle East capitals, as to the United States’ reliability as a partner.

All of these events are examples of what Middle Eastern leaders view as a bipartisan progression of US disengagement across the region politically, economically, and militarily. Looming prominently in the background of these frustrations is the Joint Comprehensive Plan of Action (JCPOA)—the nuclear deal that the United States and world powers struck with Iran in 2015, and that Trump withdrew from in 2018. Regardless of whether the United States reenters the JCPOA or not, the narrative in Riyadh, Abu Dhabi, Jerusalem—and more quietly in Manama, Cairo, and other regional capitals—is that the United States’ singular focus on Iran’s nuclear program has enabled Tehran to advance its missile capabilities, Middle East adventurism, and support to regional proxies and partners, most prominently Shia militants in Iraq, Hezbollah in Lebanon, and the Houthis in Yemen. At the core of the issue is that Arab states and Israel view US policy toward the region as having made the Middle East less secure.

The alternative narrative, however, which is coming out of Washington, espouses that for the United States and its policy makers, the Middle East remains a priority and Washington recognizes the criticality of the region. US national security officials insist that the now decade-old shift of focus to Asia, primarily to China, does not mean a disregard for the Middle East, but simply a need to better balance US economic and security efforts. To many US policy makers, the region is exhausting and intractable, beset by problems that reflect leaders’ inability to make the hard and necessary choices to advance their economies and provide opportunities to the youth bulges that dominate most Arab states’ populations.

In the 1990s, it did not cost US policy makers much to pay extra attention to the Middle East. Russia was a vanquished foe desperately trying to find its way in the post-Cold War era. China had potential but was relatively nascent in its growth and still very much finding its place on the world stage. The first Gulf War put the United States in excellent stead to many in the region and the signing of the Oslo Accords provided hope across the Middle East, and the world, that this oft-troubled region would soon be at peace. By the early aughts, however, there was reason to be concerned about the over-the-horizon challenges China and Russia might pose. The passage in 2000 of Permanent Normal Trade Relations with China and Beijing’s joining the World Trade Organization in 2001 were supposed to usher in a new era of economic openness that would compel Beijing to also moderate its politics on human rights, in a manner that would bring it ideologically closer to the United States and its Western allies. When it came to Russia, then US president George W. Bush in June 2001 implied that Russian President Vladimir Putin was someone whom the United States could work well with when he infamously said that he found Putin to be “very straightforward and trustworthy” and was “able to get a sense of [Putin’s] soul.” But any concerns about China and Russia were simply not prioritized, and the Middle East, especially after September 11 and the US-led invasion of Iraq in 2003, remained the dominant region of US foreign policy efforts.

A decade later, the challenges posed to Washington from Moscow and Beijing should have been abundantly clear. Russia’s invasion of Georgia in 2008 was, in hindsight, an explicit declaration that Putin was not prepared to simply accept Russia’s diminished post-Cold War stature. For China, the deliberate trade-off by Chinese President Xi Jinping and Premier Li Keqiang to create slower but more stable economic expansion than existed during the aughts was a harbinger of the slow but steady rise Beijing would pursue to take, what it believes to be, its rightful place as the world’s dominant superpower.

This is not to say no one raised concerns about Russia or China as potential threats to the United States’ role as the world’s singular superpower. But the Arab Spring, efforts to draw down the US military presence in Afghanistan and Iraq, the 2011–13 Iraq insurgency, the Syrian war, confronting the Islamic State of Iraq and al-Sham (ISIS), and reaching a deal with Tehran on its nuclear program dominated Obama’s foreign policy agenda. In the Trump administration, the view was that much closer ties with Middle Eastern states were needed, but that requirement was ultimately about undoing the JCPOA, and that meant closer relations not with the region as a whole but with specific leaders such as then Israeli prime minister Benjamin Netanyahu, then Emirati crown prince Mohammed bin Zayed, and Saudi Crown Prince Mohammed bin Salman.

When Biden came into office his foreign policy objectives were clear: end the war in Afghanistan, confront the bevy of challenges associated with China, and restore the United States’ prominence and stature with European and other historic allies, such as Japan and South Korea. The Middle East was nowhere on that list of priorities, and few issues in the region garnered the administration’s attention except for Iran, where the question is meaningfully narrow: Does the United States reenter the JCPOA, or not?

Despite a multitude of important developments in the Middle East over the last eighteen months, none of them strike most followers of the region as particularly novel. Iran’s election of a hardline president; the myriad concerns that go along with an unstable Israeli government; Kurdish and federal Iraqi leaders in conflict with each other over oil and energy production; the continuation of Lebanon’s economic collapse; the lack of a resolution to the conflict in Libya; Gulf states facing continued threats from the Houthis; the list goes on. The reality is that since Biden came into office, none of these particular regional geopolitical machinations have been sufficient to compel the administration to alter its strategy toward the region and increase US involvement in it.

The Biden administration is probably frustrated, however, that the dominant narrative of US involvement in the region is the one coming from Middle Eastern capitals, despite Washington not viewing itself as seeking to permanently disengage from it. Arab capitals contend it is the lack of actionable US support and engagement in the region that are the problem, not the rhetoric; but the rhetoric coming from Washington has not been helpful. US leaders over the last decade on multiple occasions have made unnecessarily loud and public statements that China is Washington’s focus going forward, not the Middle East. Had the same policy of rebalancing priorities been effectuated quietly, Arab leaders would still be frustrated and seeking technology and military equipment from China that the United States was unwilling to transfer and sell. However, Arab leaders probably would not be inclined to be as forward leaning, as they are today, in stridently announcing their intentions to hedge between the United States and China; self-fulfilling statements that induce Arab leaders to advance their country’s relationship with Beijing more than they might have otherwise, ultimately undermining U.S. interests in the Middle East.

The irony is that for much of the last two decades, Middle Eastern leaders were extremely critical of how the United States engaged with the region. They complained that the United States was waging a war against Islam; held the United States at least partially responsible for sparking sectarian conflicts in the region that killed hundreds of thousands; and during the Arab Spring, Arab leaders and those offering themselves as alternatives to existing regimes lambasted US leaders for being insufficiently supportive. Now that Washington’s focus is elsewhere, Middle Eastern leaders are complaining that the United States is abandoning the region.  It is the foreign policy equivalent of the classic Woody Allen joke about two elderly women eating at a restaurant. “[O]ne of them says, ‘Boy, the food at this place is really terrible.’ The other one says, ‘Yeah, I know; and such small portions.’” Washington’s view is that most Arab capitals have, over the last decade, held themselves out as being, at best, reluctant and skeptical over US efforts and strategy in the Middle East, only to now complain that the United States is disengaging from the region.

In Washington’s view, not prioritizing the Middle East over other regions is not the same as declining to prioritize it. The Biden administration views itself as striving to undertake meaningful efforts against challenges in the region by expanding the Abraham Accords; working to permanently end the war in Yemen; and seeking to potentially mediate between Israel, Jordan, Lebanon, and Egypt on various energy development and production efforts. What is different now, however, is that the decades of Middle East primacy in US foreign policy decision-making are over. The geoeconomic and political tides have shifted immensely over the last thirty years and in the future—regardless of whether the president is a Republican or Democrat—the United States views itself as no longer having the flexibility to prioritize the Middle East over the rest of the world. To US policy makers, the long-term challenges from Beijing are acute and, in many ways, as existential to US global leadership as Israel, Saudi Arabia, Bahrain, and the UAE view Iran as being to them.

The future of the United States’ relationship with the Middle East is going to be about how to permanently balance giving Arab state allies enough attention while keeping the focus on China. It is not a static calibration but will require yearly, monthly, and occasionally weekly adjustments. Any US administration will need to recognize that for Middle Eastern leaders, personal relationships are the bedrock of how to make progress on priorities. After decades of Arab leaders knowing that their region was a bigger priority than any other in the world for the United States, the fact that this is no longer the case is a meaningful hurdle to overcome. To do so requires the development of better engagement, trust, and reassurance between US and Arab counterparts, backed up not just in words but in deeds, to include, when appropriate, the tangible provision of US economic, political, security, and technological support.

Jonathan Panikoff is the Director of the Atlantic Council’s Scowcroft Middle East Security Initiative and the former deputy national intelligence officer for the Near East.