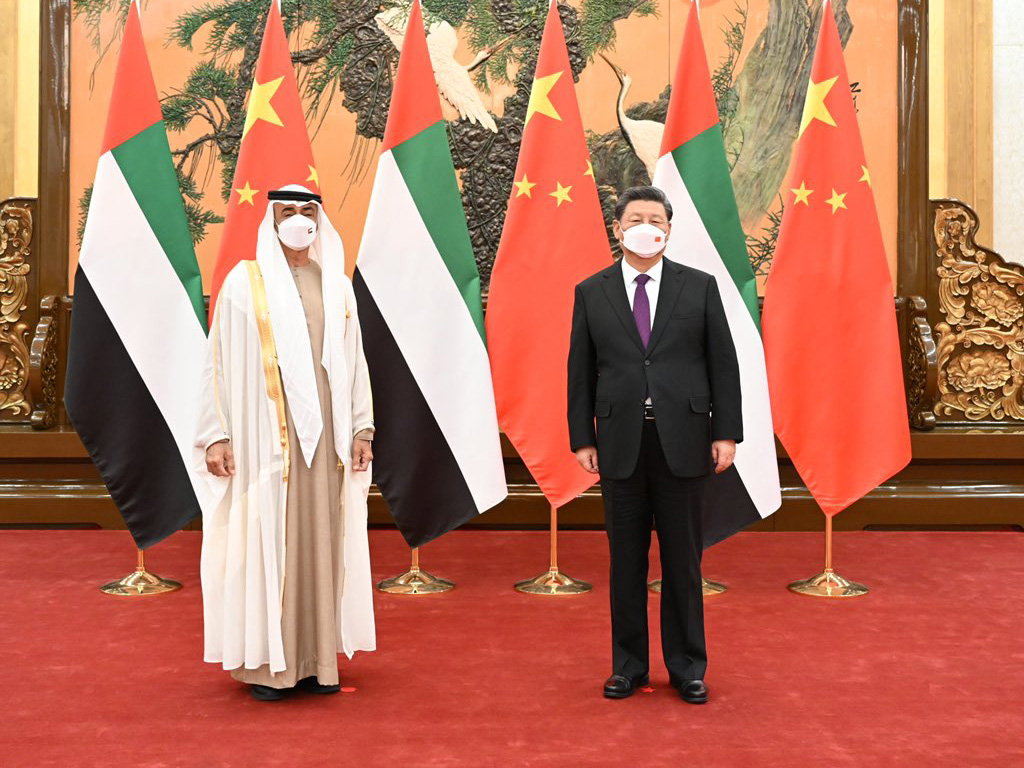 The past few months have witnessed a new Middle East full of complexity and contradiction. On the one hand, some of the tensions that have gripped the region over the past decade now show signs of abating, with various adversaries engaging in dialogue and rapprochement. Syrian President Bashar al-Assad made a historic visit to the United Arab Emirates in March, and Saudi Arabia is resetting its relations with Turkey while holding rounds of talks with Iran on the restoration of ties. On the other hand, in addition to the COVID-19 pandemic that is still raging across the region, the lives of people in Middle Eastern countries are continuing to be afflicted by various internal and external crises. The average economic growth rate in the Middle East in 2021 was 4.1 percent, which was lower than the global average. Meanwhile, Middle Eastern leaders are closely watching the United States’ strategic rivalry with China and Russia, worrying the region would remain vulnerable to the spillover effects of extra-regional great-power politics.

Starting with the Trump administration, Washington has unequivocally viewed Beijing as its most serious challenger and sought to mobilize resources from around the world to counter China. Despite the differences in wording and approach, US President Joseph R. Biden, Jr., has largely retained his predecessor’s framework of great-power competition. However, the retrenchment of the United States in the Greater Middle East, in particular the hasty withdrawal from Afghanistan in 2021, gave the world a clear signal that there is only a small chance that the United States will fully intervene in crises outside the Indo-Pacific. As a result, Moscow perceived that this could be the right time to hit Kyiv hard, enlarging its buffer zone with the West, and pushing back NATO’s eastward expansion to a certain extent.

Russia’s invasion of Ukraine has forced Washington to refocus most of its recent attention on Eastern Europe. Top US officials claim that the West has forged an unprecedentedly strong alliance against Russian President Vladimir Putin, and that Moscow now faces a global campaign of sanctions and condemnation. In reality, however, the core of such a united front is still limited to NATO members and a small number of traditional US allies in the West and South Pacific. Many other countries, including most Middle Eastern ones, obviously have little enthusiasm for participating in the firm and vigilant containment of Russia at their own cost. The refusal of Gulf leaders to take calls from the White House amid the Ukraine conflict is just another example of the fading unipolar moment in the world in general and in the Middle East in particular.

The major reason for the decrease in US authority over Middle Eastern countries is not the decline of absolute power but the lack of political commitment and predictability. A country’s reputation for competence and credibility, as argued by Stephen Walt, a professor of international affairs at Harvard University, could be its “critical force multiplier,” and the global influence of a hegemonic power inevitably erodes when others doubt its wisdom and ability to act persistently and effectively. While the Democrats in Washington detest former US President Donald J. Trump’s erratic narrative pendulum, which swung between bellicosity and disengagement regarding the Middle East, for now Biden is also caught between reviving the Iran nuclear deal and reassuring regional allies. Therefore, attempts by the United States to induce Middle Eastern countries to contribute comprehensively and directly to the plan of “decoupling” from China are likely to come to naught. Against the background of regional countries betting on multiple sides among major powers, China, Russia, and some European countries all have significantly expanded their strategic space in the Middle East.

Beijing’s involvement in the Middle East is mainly concentrated in infrastructure and trade, but in recent years it has also gradually extended to the domains of security and social governance. In 2021, China continued to be the largest trading partner of Middle Eastern countries, with the trade volume close to $400 billion. Nineteen countries in the region have had their development plans, including Vision 2030 of a couple of Arab states and Turkey’s Middle Corridor, strategically synergized with China’s Belt and Road Initiative.

In the energy sector, the share of Middle Eastern oil and gas in the Asian market, including in China, has largely expanded in the last decade, while US and European companies have withdrawn a large part of their investment from the Middle Eastern energy industry for years before the Ukraine war. In addition, in the fields of clean energy, such as solar and wind, which is a growing concern for oil dependent Middle Eastern states, China is also in a leading position as it has the largest renewable energy equipment production capacity in the world. In the realm of arms trading, Chinese-made military drones all but dominate the Middle Eastern market, with the United States unwilling to supply such advanced armaments to its Arab allies.

It should be pointed out, however, that China remains hesitant to march on the Middle East in an all-round way due to a number of difficulties and dilemmas. The Middle East is still arguably the most volatile region in the world, and will continue to be beset by sectarian violence, ethno-religious conflict, and political uncertainty for the foreseeable future. Chinese officials, such as Foreign Minister Wang Yi, openly and repeatedly describe the region as “the lowland of global security,” and China has good reason to doubt that its investment and cooperative projects in the region could survive and thrive as the world economic recovery faces even more severe challenges. In addition, policy makers in Beijing also face a seemingly insoluble dilemma when formulating their Middle East policy. A rapid increase of China’s footprint in the Middle East could divert some of the pressure from the United States in East Asia, but such a move would require substantial investment in political, economic, and military resources and would likely lead to unwelcome regional entanglements.

In the early days of the Cold War, Chinese Communist Party leader Mao Zedong proposed the concept of “intermediate zone” to depict the vast area between the United States and the Soviet Union, in which China would have great potential on its way back to the world’s center stage. In the current digital age that follows a period of US unipolarity, intermediate zones have not just returned but become much more complex as the number of issues affecting transnational relations drastically increase. In the United States’ asymmetric competition with China, Russia, and Iran, many countries in different regions of the world may cooperate with Washington on specific targets or issues, but more often they would largely remain neutral or adopt a strategy of hedging.

It is necessary and ideal, for example, for the Arabs and the Israelis to seek US support to cope with the threat from Iran, but amid the confrontation between Washington on one end and Beijing or Moscow on the other, they would maintain strategic dialogue with both sides to avoid damaging actual interests. In this sense, the rise of complex intermediate zones is hard to reverse and, in fact, makes the strategic balance between the United States and its global rivals more stable. This is why Beijing understands that it is unwise to make replacing the United States the fundamental goal of its Middle East policy, but claims to support Middle Eastern countries resolve regional security issues “through unity and cooperation” and the people of the Middle East “independently explore their own development paths.”

The war in Ukraine has provided an opportunity to observe the rise of complex intermediate zones, and subsequent developments on the battlefield will continue to influence the course of global affairs. As Russia failed to quickly topple the Ukrainian government, Washington adjusted its policy, shifting from preventing the conflict to prolonging it. This seems like a “smart” move to continuously weaken the Russian army without losing a single US soldier, but it is not beneficial for Washington’s role as world leader. The longer the war drags on, the worse the results will be for many developing countries, as food crises, economic difficulties, and political turmoil might arise.

Nevertheless, the interests of the Global South are not a priority in Washington right now. The United States is focused on how to bleed Russia, and preferably smear or pressure China as well in the process. On the issue of pursuing stability and development in the Middle East, countries including China, the United States, and also many European ones share common interests and could have cooperated accordingly to solve practical problems in the lives of local people, such as contributing to connectivity through infrastructure construction, providing the energy transition with funds and technology, and protecting the natural environment. But under the current circumstances, every extra-regional major power is individually exploring new ways of dealing with the Middle East. While Washington debates how to strike a balance between Ukraine and the Indo-Pacific, China is striving to navigate and gain more influence in many other parts of the world, including the Middle East, in particular by learning how to provide regional public goods without getting into unnecessary trouble.

She Gangzheng is an associate professor of international relations at Tsinghua University in Beijing.